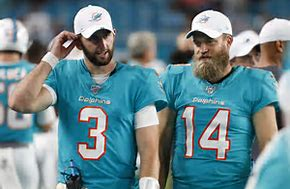 The Miami Dolphins hosted the Jacksonville Jaguars in Week 3 of the NFL Preseason Thursday night, managing to grab a 22-7 victory.

The main headlines from Thursday night’s preseason game was the growing question of who will win the starting quarterback position for the Dolphins.

Veteran Ryan Fitzpatrick’s lackluster performance against the Jaguars paved a way for Josh Rosen to prove his capabilities.

Rosen and Fitzpatrick to Miami

Rosen spent his rookie season with the Cardinals after being drafted 10th overall in the 2018 NFL Draft. After a less than stellar season, going 3-13 while throwing 11 touchdowns and 14 interceptions, Arizona claimed the worst record in the league and the number pick in the 2019 NFL Draft.

The Cardinals selected Kyler Murray first overall, making it clear that Rosen’s time in Arizona had ended. The next day Arizona traded Rosen to the Miami.

The Fitzmagic era in Tampa Bay quickly came to end during the 2018 season. Fitzpatrick earned the Buccaneers starting quarterback role while Jameis Winston was on suspension.

Additionally, Fitzpatrick started in seven games for the Buccaneers, throwing for 17 touchdowns and 12 interceptions. At the end of the 2018, Fitzpatrick signed a two-year contract with the Dolphins as a free agent.

We have signed quarterback Ryan Fitzpatrick.

Fitzpatrick signed with the Dolphins in hopes of being named the team’s starting quarterback.

At the beginning of the preseason it seemed that the Miami coaching staff planned on having Fitzpatrick take the start Week 1. With 14 seasons of experience in the league, Fitzpatrick is no stranger to a quarterback battle.

However, Rosen’s preseason performance against the Jaguars intensified the battle.

What started out as a clear cut answer is now more of a question. Miami head coach Brian Flores has yet to name a starter for Week 1.

Flores stated that he is still evaluating both Rosen and Fitzpatrick.