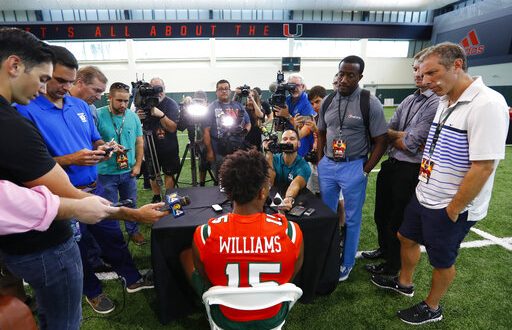 The 150th season of NCAA football is almost upon.

With that, the very first weekend of college football will reignite a longstanding rivalry between the Miami Hurricanes and No. 8 Florida Gators.

The Hurricanes enter the 2019 campaign with a new head coach in Manny Diaz and a newfound offense following their disappointing season in 2018 (7-5; 4-4).

Saturday’s matchup at Camping World Stadium in Orlando, FL will mark the first meeting between both teams since 2013.

Diaz’s first test at the helm of his Hurricanes will effectively be a trial by fire. On the defensive side, Miami boasts one of the most electric linebacking cores in the country. Despite a lukewarm record in 2018 their unit still ranked fourth in total defense last season.

On the other side of the football, Diaz has a few more unknown factors to contend with.

Taking over under center in Miami this season for the combination of Malik Rozier and N’Kosi Perry will be redshirt freshman Jarren Williams. The Georgia native attempted just three passes last season but managed to outplay Perry and Tate Martell in training camp.

Florida and Todd Grantham’s defense will have to contend with a very explosive and mobile passer in Williams. He was ranked as the sixth-best dual threat passer by ESPN in his class.

Williams will also enjoy the luxury of throwing to a quietly impressive group of receivers. However, in a neutral setting, establishing the run game will be just as crucial for the Hurricanes.

Florida’s defense will surely be prepared to build off a promising campaign in 2018. The arrival of Dan Mullen and Grantham helped Florida finish 28th in total defense despite struggling to defend the run on multiple big occasions.

On the other hand, Miami’s defense will also have to be weary of a Gators’ offense that is looking to take large strides forward.

Battle in the trenches

Florida’s depth at offensive line comes in as questionable following the departure of four of last season’s starters.

Opposite them Miami will be able to call upon DE Jon Garvin, LB Shaq Quarterman and a number of other talented players to attempt and stymie Mullen’s offense.

Both teams have notable question marks at offensive line which may lead to a more low-scoring contest in Orlando. However, both offenses also possess plenty of game-breaking that can sway this marquee matchup in any direction.

Joe Zagacki of WQAM explained why Miami’s offensive line comes in as an area of concern for the Hurricanes.

For Florida, Mullen’s second season in The Swamp will be about building upon the success they had in Mullen’s debut year. Diaz, contrarily, is now tasked with injecting energy and fresh air into a Hurricanes’ program that struggled for consistency in 2018.

Kick-off is set for 7 p.m. from Camping World Stadium.