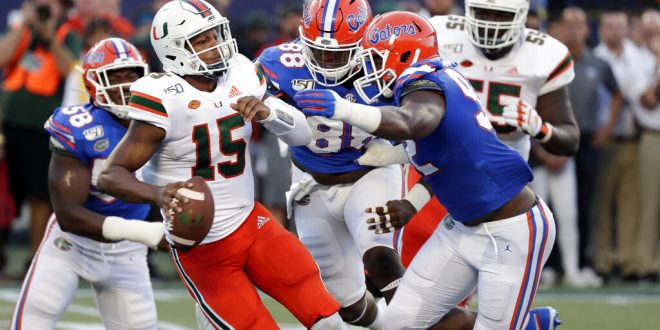 Hurricanes Have Work to Do After Sloppy Loss to Gators

The Miami Hurricanes traveled to Orlando looking to capture their 30th win against their in-state rival, the No. 8 Florida Gators, on Saturday.

They came up short, as Florida narrowly escaped the messy game with 24-20 victory. The win moved Florida one game closer to balancing out the rivalry series.

While the Gators had their fair share of mistakes at Camping World Stadium, the Hurricanes were no different.

Motivated to get better. pic.twitter.com/OOsvtPaK1H

Here are two things Miami needs to work on before their first ACC matchup in two weeks.

The Hurricanes looked somewhat undisciplined and unprepared on Saturday. The team was penalized 14 times for a total of 125 yards. Three of the penalties were for delay of game and four were for false starts.

Miami head coach Manny Diaz said the penalties committed show where his team is at right now and how much further they have to go.

It should surprise no one that this is mentioned. Despite impressing ‘Canes fans with a 65.5 percent completion rate (19 of 29) for 214 yards, a touchdown, and no interceptions, quarterback Jarren Williams found himself enveloped by Florida’s stout defensive line a whopping 10 times. It was the most sacks in a game for a Florida defense since 1996.

But the redshirt freshman doesn’t blame his offensive line for all of those sacks, despite what others may be saying.

“Those 10 sacks, a lot of them weren’t on my O-line,’’ Williams told the Miami Herald. “A lot of them were on me. I felt like a couple of times I got pressured and I became a runner instead of remaining a passer [and] keeping my eyes down the field. So, that’s definitely something I’m going to learn from.

Enos says five of the 10 sacks on Saturday night were on Jarren Williams. https://t.co/srtdsJXJ2I

The Hurricanes have a bye this week, which gives them a chance to work out the kinks before facing their first ACC opponent. The team will travel to North Carolina to take on the Tar Heels on Sept. 7 at 8 p.m.

Camille Woodhouse is a Sports and Media student at the University of Florida College of Journalism and Communications. In the past, she has covered the Atlanta Falcons and Florida Gators football for various sports news outlets. She is an Atlanta native and a fan of football.
@CJW_SportsRadio
Previous National League Wild Card Race Update
Next Rays Take on Astros in Big Road Test