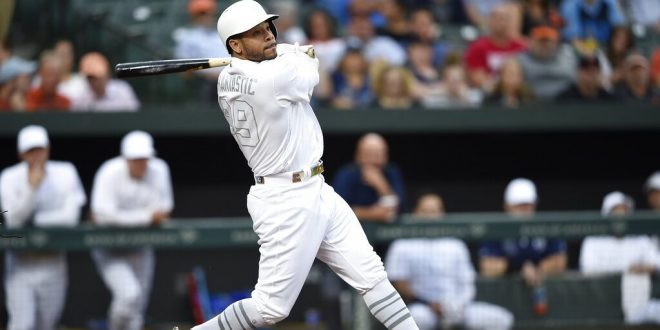 Tampa Bay Rays' Tommy Pham follows through on a double against the Baltimore Orioles during the first inning of a baseball game Saturday, Aug. 24, 2019, in Baltimore. (AP Photo/Gail Burton)

The Tampa Bay Rays travel to Houston to take on the Astros as they face a tough road test with five weeks to go in the regular season.

Both teams will send their top pitcher tonight as Charlie Morton gets the start for the Rays and Justin Verlander takes the hill for the Astros. Both rank top three in the American League in ERA.

Verlander leads the majors with 239 strikeouts and a 0.81 WHIP. In addition, he is tied for second in wins. The 36-year-old has shown no signs of slowing down, and as a result, he is the front runner for his second career Cy Young Award in his 15th season.

For the Rays, Charlie Morton is having a career year of his own. He sits third in the AL with a 2.85 ERA and has recorded just under 200 strikeouts in 167 innings. The former Astro has been Tampa Bay’s best pitcher due to Blake Snell’s inconsistent and injury-riddled season.

Charlie Morton did Miggy so so so dirty here… pic.twitter.com/HNdRcWrYTm

With just over a month left in the regular season, both teams have their sights set for the playoffs. At the moment, the Astros have the AL West all but locked up. They sit nine games up on the Oakland Athletics at the moment. Houston hopes to secure an impressive third straight 100-win season.

On the other hand, Tampa Bay will be in a dog fight for a playoff spot until the season ends. With the division likely out of reach, the Rays will look to secure one of the wild card spots. Meanwhile, they are currently tied with the A’s for the second spot and sit a half-game behind the Cleveland Indians for the first spot.

This is an important road test for a Tampa Bay team that is in the middle of a postseason push. After this series, the Rays will enter a 10 game homestand against the Indians, Orioles and Blue Jays. Winning the series against arguably baseball’s best team could give the Rays a confidence boost before they return home.

The Rays will be going against an extremely tough defense in this series. Houston will deploy its pitching trio of Verlander, Cole, and Greinke this series. Gerrit Cole, the AL leader in ERA, will get the start Wednesday night and deadline acquisition Zack Greinke takes the mound Thursday.

The Rays will likely lean on two other arms of their own throughout the series. Ryan Yarbough and Trevor Richards have been lights out for Tampa Bay as of late. Yarbough has been pitching starter like innings and has a 0.75 ERA in 24 innings this month. Similarly, Trevor Richards has been on fire. After being acquired from the Miami Marlins at the trade deadline, he has 11 strikeouts in just over nine innings of work and could be the third starter for the series.

Some in the Rays organization will travel to Houston with a heavy heart. Original team owner Vince Naimoli died Sunday morning at 81 with an uncommon brain disorder. He landed the American League expansion team in 1995 and the Devil Rays began to play in 1998.