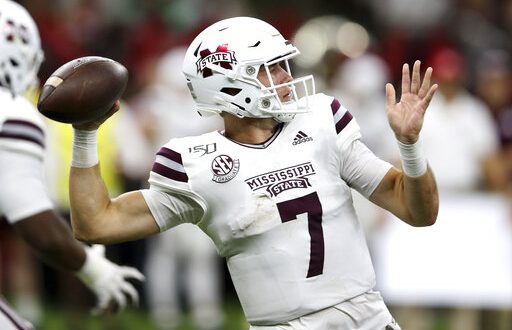 The Mississippi State Bulldogs will be facing an in-state opponent this week. The Bulldogs host the Southern Mississippi Golden Eagles at home in Starkville on Saturday. Both teams are coming off of wins to start their seasons. The Bulldogs beat an underdog Louisiana-Lafayette team by only a ten-point margin, 38-28, and the Golden Eagles beat Alcorn St. by a score of 38-10.

In a game in which they were never down, Mississippi St. left a lot to be desired in their opener. Graduate transfer Tommy Stevens looked good in his first college start, going 20-30 with 236 yards through the air and two scoring tosses. Running back Kylin Hill ran for 197 yards and a touchdown. The Bulldogs were able to move the ball effectively with an extremely balanced offense.

Coach Jim Moorhead talked of Stevens’ skill with his arm and legs.

“I think anytime your quarterback can be a legitimate threat in the run game it forces the defense to defend the entire length and width of the field.”

Tommy Stevens with the deep ball…

The defense, however, was another story.

The Bulldogs defense gave up 430 yards to a UL-L team that finished last year with an overall record of 7-7. There was a bright-side though, the Bulldogs did force four turnovers.

Southern Mississippi started off their 2019 season with a bang. An 89-yard touchdown return to kick-off the game and the season.

In an otherwise sloppy game filled with 17 penalties for 138 yards, Southern Miss. dominated. The Golden Eagles were simply more effective with the ball in their hands. They outgained Alcorn St. by 170 yards even though the Braves held possession for nine minutes longer.

The X-factor though was Jaylond Adams, who bookended his day with return touchdowns in the first and fourth quarters of the game.

The all-time record of these two in-state teams is all evened up at fourteen a piece with one tie. Miss. St. has a four-game win streak since 1989 to build upon.

Miss. St. is a 16 point favorite at home and the Bulldogs look to build upon their strong offensive performance.