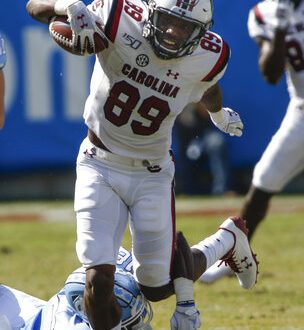 South Carolina and Charleston Southern’s first-ever matchup was at risk of being postponed because of the dangers of Hurricane Dorian. The storm is currently headed towards the coast of the Carolinas, and it has prompted evacuations in Charleston and bordering counties.

The scene is now set, and safe, for football.

Both teams began their seasons with losses last week. Following their 24-20 loss to UNC, South Carolina will surely be much more focused on Saturday ahead of next week’s bout against Alabama.

Not the way we wanted to start.

Will Muschamp’s team mustered only 270 yards of total offense last week against UNC. Much of that was due to poor quarterback play on the part of senior Jake Bentley.

The Alabama native completed just 16 of his 30 pass attempts for 142 yards to go along with two interceptions.

Now, Bentley will miss approximately two months of playing time with a mid-foot sprain. Muschamp has effectively handed the keys to the Gamecocks’ offense to freshman QB Ryan Hilinski.

Muschamp’s team began their 2019 campaign in disappointing fashion against the Tar Heels, but the Gamecocks did have success on the ground.

The combination of seniors Tavien Feaster and Rico Dowdle rushed for 128 yards. Muschamp’s offense showed that it has the potential to be well-balanced despite the loss.

A home matchup against Charleston Southern, a program that has struggled mightily in SEC play, should be just what Hilinski and the Gamecocks need to quickly correct their loss in the opener.

Meanwhile, the Buccaneers have never defeated an SEC opponent in school history.

In their last 6 matchups against SEC teams dating back to 2009, opponents have outscored Charleston Southern 292-59. Their defense had a miserable time once again last week on the road against Furman. Autry Denson’s team allowed five rushing touchdowns and 369 yards through the ground in the loss.

The Buccaneers enter the contest as heavy underdogs. They’ll hope the effects of Hurricane Dorian have distracted their opponents as much as it impacted their own preparations.

Kickoff is once again set for Saturday at noon from William-Brice Stadium.

Sports media and management student at the University of Florida. Content creator for ESPN 98.1 FM/ 850 AM WRUF.
@TheEdgarChavero
Previous LSU Traveling to Texas For Top-10 Matchup
Next Missouri Meets West Virginia In A Transfer Quarterback Showdown