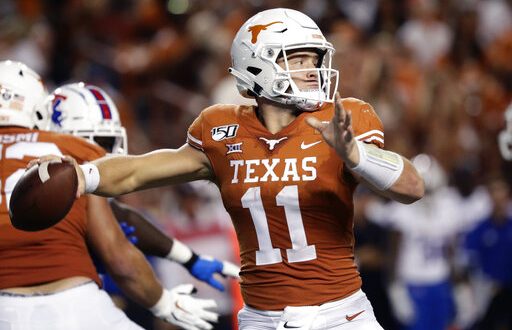 In what is touted as one of the best games of the week, the No.6 LSU Tigers travel to Austin, Texas to face the No.9 Texas Longhorns.

Everyone will be tuning in to this one as it is the first top-ten matchup of the season. Both teams come into the ballgame 1-0 and with high expectations.

Every year, the sports world discusses whether or not UT is back to being a dominant force in college football.

The Longhorns are led by quarterback Sam Ehlinger. He became a household name last season when he led Texas to a new year six bowl win. Moreover, the QB is off to a great start in 2019, throwing for 310 yards and four touchdowns in the season opener.

The biggest question headed into the game for Texas will be whether or not they can contain the LSU rushing attack and force Joe Burrow to win the game himself. The Tigers’ backfield is a bit cloudy at the moment as a result of Nick Brossette’s departure. The team did not have anyone carry the ball over 10 times in their season opener against Georgia Southern.

After an up and down first season in Baton Rouge, Joe Burrow is looking to help LSU take the next step this season.

Improvement from Burrow is expected after LSU shifted to a true spread offense in 2019. Gone are the days of the Tigers wearing out opponents with the run game. Head coach Ed Orgeron has put his faith into his quarterback to air it out. Burrow threw a pass to 14 different wide receivers last Saturday en route to a five-touchdown performance.

If LSU is going to beat Texas, Burrow needs to be the reason why.

You know it’s the big game of the week when College Gameday is rolling into town.

The eyes of the college football universe will be on the Longhorns and Tigers on Saturday. The game is set for a 7:30 kickoff. The game will be televised on ABC.