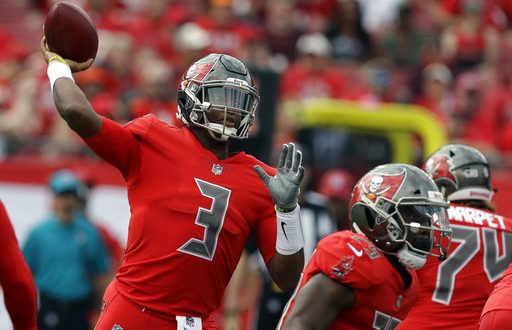 Tampa Bay Buccaneers quarterback Jameis Winston (3) throws a pass during the first half of an NFL football game against the Carolina Panthers Sunday, Dec. 2, 2018, in Tampa, Fla. (AP Photo/Chris O'Meara)

Both teams lost their home openers on Sunday. The Buccaneers fell to the San Francisco 49ers 31-17, and the Panthers fell to the Los Angeles Rams 30-27.

With each team looking to secure a win, this division rivalry looks to be contentious. Buccaneers’ head coach Bruce Arians spoke to the media about how tough it can be to prepare for the Panthers.

According to Arians, the option play with quarterback Cam Newton is tough to game plan for in a short week. One dangerous aspect of the Panthers’s option offense involves running back Christian McCaffrey.

McCaffrey impressed many in his first game of the 2019 season. He recorded 209 total yards of offense, with 128 yards rushing and 81 yards receiving. McCaffrey also added two touchdowns to top off his performance against the Rams on Sunday.

Newton spoke about McCaffrey’s skillset in the run game and the passing game.

For the Buccaneers, one of the keys to their success will be the play of quarterback Jameis Winston. In Tampa Bay’s game Sunday against the 49ers, Winston threw three interceptions, two of which were returned for touchdowns. One of those pick-sixes was to Richard Sherman in the third quarter to extend the 49ers lead to 13 points.

Winston, who is in the last year of his contract, needs to prove to Bucs fans that he is able to produce wins for a team that is looking to make the playoffs for the first time since 2007. He sits at 3-4 against the Panthers in his career and 9-12 against division opponents in his career.

The Bucs offense produced 295 yards of offense, which will look to improve against a Panthers defense that allowed 349 yards to the Rams in week one.

In an offense headlined by receiving threats like Mike Evans, Chris Godwin and tight end OJ Howard, the Bucs look to pick up a division win in primetime on Thursday.