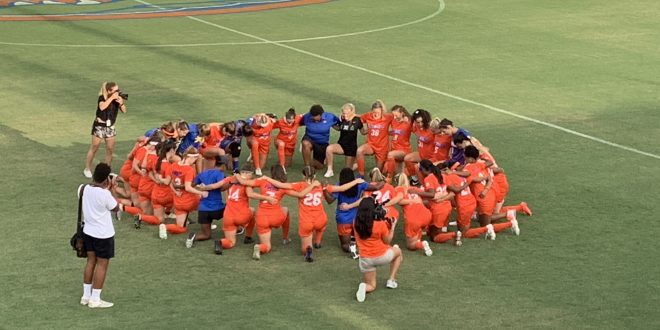 The Florida Gators defeated guests Florida Gulf Coast 4-0 at Donald R. Dizney Stadium Thursday evening. With the win, the Gators broke a four-game losing streak and improved to 3-4 on the season.

A pair of Gators scored their first-ever goals for the team, including Vanessa Kara and Kouri Peace.

Kara opened the scoring in the 14th minute. Cassidy Lindley put in some great work on the left ending in a cross into the box, and Kara finished smartly with a first-time effort.

She would grab her second of the match just 12 minutes later. After Madison Alexander’s sublime effort from distance hit the post, Kara pounced on the rebound and put away her second-ever Gator goal.

Peace would score the last goal of the half in the 36th minute. She beat her defender on the outside with a bit of pace and skill, and curled one into the back of the net from a slight angle.

The Gators weren’t done scoring there. Parker Roberts would finish off FGCU from a corner. She out-jumped her marker well and nodded it past a few defenders to score the fourth and final goal of the match.

Gator coach Becky Burleigh said that she emphasized set pieces ahead of the match against FGCU.

The Florida Gators adopted Brooke Dunn on Aug. 6 as a part of the Friends of Jaclyn program. Brooke was diagnosed with neuroblastoma in April of 2018. Just over a week after her adoption, Brooke was able to ring the bell at Shands Pediatrics to signal her victory over cancer.

The Gators’ very own Lauren Evans also had a bout with cancer. The redshirt sophomore was diagnosed with acute myeloid leukemia during her freshman season with the Gators in 2017. Her strength, hope and determination made her the light of the team. She beat cancer in April of 2018.

Burleigh says having Brooke and Lauren on the team helps give her players perspective.

Peace was very excited to have Brooke join the team this season and dedicated the win over FGCU to her.

The Gators will continue their stretch of home games with their final non-conference match against the University of Miami on Sunday. Kickoff begins at 6 p.m. Fans should wear blue to “Blue Out The Diz.”