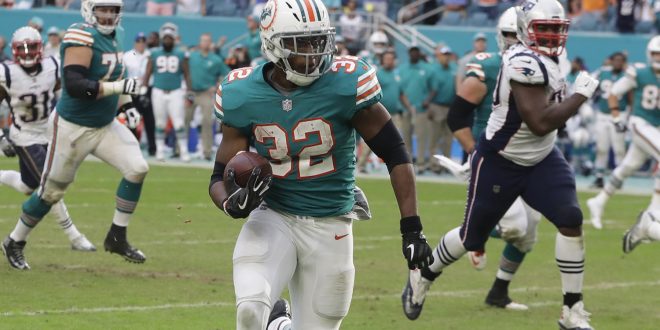 Miami Dolphins running back Kenyan Drake (32) runs for a touchdown during the second half of an NFL football game against the New England Patriots, Sunday, Dec. 9, 2018, in Miami Gardens, Fla. The Dolphins defeated the Patriots 34-33. (AP Photo/Lynne Sladky)

The Miami Dolphins and the New England Patriots are no strangers during the NFL regular season being AFC East rivals. However, after a grueling loss to the Baltimore Ravens last weekend, 59-10. Miami needs to prepare for what’s to come against the Super Bowl Champions.

There is no question that the Miami Dolphins are in a rebuilding stage. From hiring new head coach Brian Flores to signing 36-year old quarterback Ryan Fitzpatrick this season, the Dolphins need to find their footing in the NFL. However, that discovery may need to come sooner than later against the Patriots if they want to get a win early this season.

What’s good is that some familiar faces remain on the team, who can help the new team members feel comfortable in Miami, while also building that camaraderie that they desperately need in order to play the game.

The Patriots have always been a threat to the Dolphins, and more than ever has New England come out strong on the front line. It’s hard to find a weak spot in Bill Belichick’s team because of the consistency they’ve kept year after year.

This tight-knit team is going to be difficult for the Dolphins to unravel, but not impossible.

The Miami Dolphins aren’t shying away from making roster moves in order to build the team they want to build. This isn’t necessarily a bad thing at the beginning of a season when contracts begin to get finalized.

On Thursday, the team signed defensive end Tank Carradine and placed defensive end Jonathan Ledbetter on injured reserve. Carradine was a Dolphin in the preseason, but Miami split ways with him at the end of August when cutting the roster.

Despite not having strong overall season records, the Dolphins have won four of their last five games at home against the Patriots. They also lead the all-time record, 55-52.

The last time these teams met in Miami, the Miracle in Miami play was born. The Dolphins were down 33-28 with 7 seconds left in the fourth quarter, Miami completed a 17-yard pass and two lateral passes resulting in a 69-yard touchdown by Kenyan Drake. With no time left in the game and no flags on the play, the Dolphins beat the Patriots, 34-33.

Surprises like this are going to allow Miami to thrive against the Patriots, but they can’t get too comfortable depending on the unexpected to continue getting wins, instead, there needs to be a focus on smart play-calling if they want to defeat Belichick’s team once again in Miami.

*Local listings may vary depending on location.

I am a fifth-year journalism major, specializing in sports and media. My favorite sport to watch and cover are college and NFL football. When I'm not doing that, I enjoy hanging out with my cat, going to concerts and traveling.
@sportsabrina
Previous Gator Volleyball Hosts Gators Invitational
Next Florida Visits Kentucky in a Quest for Redemption