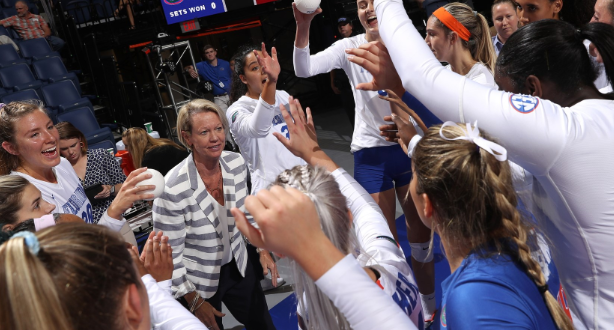 Number 11 Florida Gators volleyball takes on South Florida, James Madison and Long Beach State in the Honda of Gainesville Gators invitational. The Gators intend to redeem themselves after being on the wrong end of two different sweeps.

Florida kicks off the weekend against the Bulls (3-3) at noon Friday. Courtney Draper’s team is fresh off a home win over the North Florida Ospreys.

The Bulls return four players and brought in nine new ones, two transfers and seven freshmen.

Offensively, the Bulls are led by Gainesville native Jac’cara Walker. The senior outside hit the 1,000 mark in career kills in 2018 and was First Team All-AAC. She now paces USF this season with 66 kills.

Gator teams are 16-0 against USF in the Mary Wise era.

James Madison comes off a 2-1 weekend at the High Point Classic including sweeps of Furman and High Point University.

RECAP | Great day for the Dukes as JMU took down Furman and High Point in three sets!

Looking forward to getting back in the gym and prepping for the Gator Invitational next weekend.#GoDukeshttps://t.co/G3E4zeDNvm

JMU is led offensively by freshman middle blocker Sophia Davis and senior outside hitter Briley Brind’Amour. They lead the team with 55 and 51 kills, respectively. Also, Davis’s .441 hitting percentage is second best in the Colonial Athletic Conference.

Also, be sure to look out for senior middle blocker M’Kaela White who was First Team All-CAA in 2018.

The Dukes rank third among CAA teams in opponents’ hitting percentage (.166) through six games this season. Conversely, JMU only hits .180 as a team.

Florida rounds out the weekend with a 5 p.m. match against the Long Beach State 49ers (2-4) on Saturday. LBSU enters the tournament on a three-match losing streak including a sweep at the hands of UCLA.

Kashauna Williams and Allison Martinez lead the attack for the Beach with 92 kills apiece. Those numbers leave them tied for third among Big West players in total kills. Martinez also leads the team in points with 104.5.

Long Beach State is second in the Big West in kills per set with 13.83 and its 332 total kills are fourth.

The offense for LBSU runs through Carly Aigner-Swesey and Tia Chavira. Both setters have around 10 assists per set but Aigner-Swesey’s 10.43 are third in the Big West and Chavira’s 9.84 are fifth.

It’s early in the season and teams are still looking for identities. This tournament sure will answer some questions for any of the teams competing.