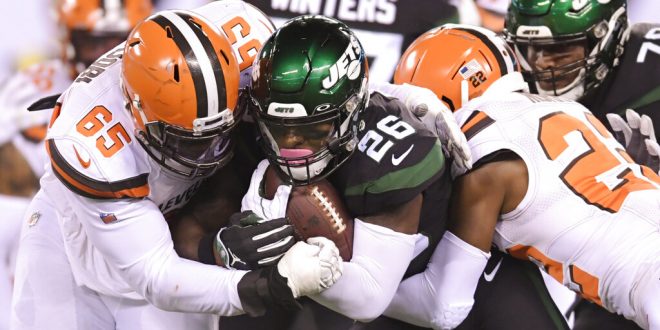 It was all Cleveland in the Monday night matchup as the Browns defeat the Jets 23-3.

Odell Beckham Jr. led the way for the Browns as they bounced back from their 30-point loss to the Tennessee Titans in week one. Beckham finished the game with 161 yards and a touchdown on six catches.

The Browns got on the board first with two first-quarter field goals. After that, they extended their lead to 13 with a 19-yard rushing touchdown from Nick Chubb early in the second and went into halftime up 16-3.

With three minutes remaining in the third, Baker Mayfield delivered a strike to Beckham on a slant route. Beckham took care of the rest, taking it to the house for an 89-yard touchdown. That would be the only score of the second half.

HE DID IT AGAIN.

Jets’ QB Sam Darnold has already been ruled out for about a month with mononucleosis. Trevor Siemian started for the Jets and went out with an ankle injury in the second quarter. Luke Falk, who was promoted from the practice squad yesterday, finished out the game. Both were incapable of moving the ball efficiently.

The Jets had a clear game plan: get the ball to Le’Veon Bell. The only problem, however, was that the Browns were all over it. Bell finished the game with 68 rushing yards on 21 carries (3.2 yards per carry) while hauling in 10 passes for 61 yards.

It was clear the Browns were stacking the box on defense, eight sometimes nine guys, to contain Bell. Myles Garrett took full advantage as he recorded three sacks on the night.

With an offense that was considered to have an elite potential in the preseason, Baker Mayfield and the majority of the offense has struggled to find its rhythm during the first two games. Overthrown balls and delay of game penalties slowed the offense down. He finished 19 of 35 passing for 325 yards, the touchdown to Beckham and an interception. Even so, he struggled to move the ball downfield.

Both teams head into their next games against a 2-0 opponent on a short week. The Jets travel to New England to take on the Patriots while the Browns host the Los Angeles Rams on Sunday night.

Previous Roethlisberger Done for Season, Rudolph to Step In
Next Dolphins Ship Minkah Fitzpatrick to the Steelers with Latest Trade