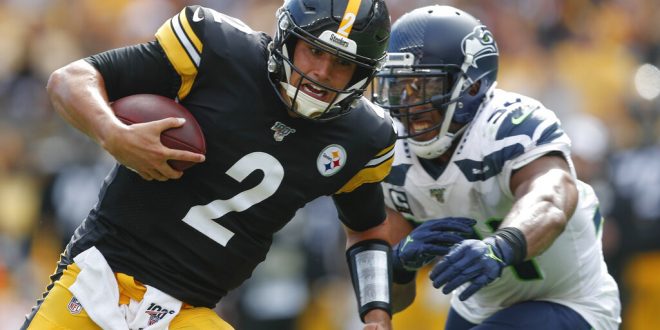 Pittsburgh Steelers quarterback Mason Rudolph (2) scrambles past Seattle Seahawks middle linebacker Bobby Wagner (54) for a first down in the second half of an NFL football game, Sunday, Sept. 15, 2019, in Pittsburgh. The Seahawks defeated the Steelers 28-26. (AP Photo/Don Wright)

Roethlisberger Done for Season, Rudolph to Step In

First, Le’Veon Bell was gone. Then Antonio Brown was sent packing. Now, the Pittsburgh Steelers are down its starting quarterback.

Ben Roethlisberger was injured in the first half of Sunday’s 28-26 loss to the Seattle Seahawks. The 15-year veteran is done for the season and needs surgery on his right elbow.

Roethlisberger signed a three-year extension with the team in the offseason but now will miss the rest of 2019. Before exiting, he finished the game 8/15 with 75 yards.

The Steelers had already lost its two biggest playmakers over the past five seasons in the offseason. Both Bell and Brown departed the team and questions marked were raised as to how the perennial AFC contender would fare. It was expected that Big Ben be the steady hand for the team to rebuild.

After Roethlisberger went down, Mason Rudolph stepped into to lead the offense. The second-year quarterback helped keep Pittsburgh in the game and threw two touchdown passes. He ended up completing 12 of 19 passes for 112 yards while also throwing an interception.

Rudolph hadn’t thrown a pass in a regular-season NFL game prior to Sunday after being the third-string quarterback during his rookie year in 2018. However, Rudolph beat out Joshua Dobbs for the backup roll in the offseason and became the de-facto backup to the future Hall-of-Famer.

'He is a great leader. Someone we all trust. We all believe in him, that he is going to step up and do the job. You saw a glimpse of him this past game.' – @TeamJuJu on @Rudolph2Mason stepping in as the starting quarterback

The second-year player knows he has a big role to fill.

So, yeah, Rudolph can sling the football.

It also helps that he has a former teammate to throw to. Rudolph and fellow Oklahoma State Cowboy James Washington were both selected by the Steelers in the 2018 draft. The duo was magnificent in college. In 2017, the two connected for 1,549 yards on 74 completions with 13 touchdowns.

Rudolph will be making his first career NFL start this coming Sunday when Pittsburgh travels to San Francisco. However, the new starter feels ready for the task.