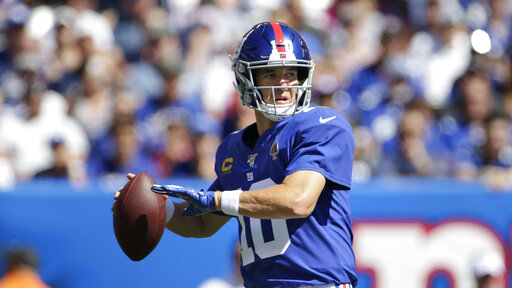 Not the End for Eli Manning

The New York Giants are moving on from quarterback Eli Manning.

Daniel Jones, the 22-year-old rookie and 6th overall draft pick out of Duke, will be the starter.

End of an era: The #Giants have named Daniel Jones as their starting QB. Eli Manning goes to the bench.

Giants head coach Pat Shurmer said it was time to shift to the young quarterback after New York’s 0-2 start to the season. Manning went 56-89 for 556 yards and threw for two touchdowns and two picks in double-digit defeats to the Cowboys and Bills.

Manning, a 16-year veteran, has led the Giants well during his time as the starter. The Ole Miss product helped bring New York two Super Bowls during his tenure, and can claim two Super Bowl MVPs, four Pro Bowls and every major Giants passing record to his resume.

Eli Manning as the Giants' QB:

Even after all of his accomplishments, however, Manning recognizes it’s time to hand the ball off to rookie Daniel Jones. He spoke with the media this week about how he will continue to support the Giants and the team’s new incumbent.

“Right now…I’m the second-string quarterback of the New York Giants,” he said. “I gotta get myself ready to play and do whatever I’m called upon and feel I need to do to help the rest of my teammates.”

Eli Manning is Sticking Around

Manning reiterated his season and time with the Giants is not over. He is continuing to take a positive outlook on the situation and prepare for the games ahead.

“I’m not dying, and the season’s not over,” he said. “There’s a lot to be positive about and a lot to be grateful for, and I just gotta accept my new role and make the best of it.”

Yes, Manning will be sticking around for 2019. The Giants haven’t even ruled out having Manning return for next season. However, that doesn’t mean Manning isn’t disappointed in his new role with the Giants.

“When you draft a young quarterback, this can happen.”

— Eli Manning on if he wishes he had more time as the starter pic.twitter.com/tqO8zolmLa

He’s choosing to acknowledge the disappointment, but he wants to take it in stride.

"There's no other option but just to handle it."

Eli Manning spoke to the media for the first time since being benched by the Giants. pic.twitter.com/39RoMoX9QI

A part of a backup quarterback’s job is to help the starter.

As Jones approaches the first start of his career, he couldn’t help but compliment Eli Manning’s class and support this season.

“As anyone who knows Eli would expect, he was nothing but supportive of me,” he said. “Obviously, you know, I understand the circumstance and it’s a difficult one…I can’t say enough about who he is as a person and as a teammate, and he’s been that way since I’ve gotten here.”

Jones, a much-questioned selection at No. 6 in this year’s NFL Draft, had a surprisingly strong preseason. The quarterback registered 416 yards passing on an 85.3% completion rate and tallied two touchdowns compared to zero interceptions.

His sharp play, along with Manning’s struggles, has thrust Jones into the starter’s spot for the foreseeable future.

We caught up with Daniel Jones after his first practice as starting QB#GiantsPride pic.twitter.com/xQqvTscoss

Jones will make his first NFL start against the Tampa Bay Buccaneers on Sunday. Kickoff is a 4:05 EST at Raymond James Stadium.

How will Daniel Jones make a difference in the #Giants’ offense once he replaces Eli Manning — Maybe as early as Sunday vs. #Buccaneers? I took a deep dive into the #NYG offense the past two seasons and found five ways he’d give an immediate boost: https://t.co/bKaset0bWr