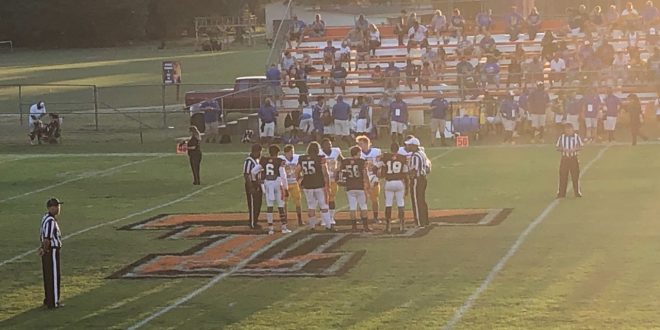 The Pregame Coin Toss ahead of Newberry vs. Trenton.

After Newberry beat Hawthorne in overtime to give first-year head football coach Edward Johnson his first win, he wanted his team to follow a certain mentality.

“We’re sharks, and now there is blood in the water,” Johnson said addressing his players.

It is safe to say those sharks have had a frenzy since that overtime win. Three straight wins with a scoring margin of +42, two of which were on the road, have the Panthers 3-1, already two more wins than they had last season.

Now, the Panthers take on an unfamiliar foe in the Taylor Wildcats in their third consecutive road game.

On the surface, the two teams play similar styles. Heavy run, occasional pass when necessary.  They even share a dependence on a running back tandem.

On the year, Taylor quarterback Slade Henderson and running back Anson Rodriguez have combined for 589 yards in their three games, each averaging roughly six yards per carry.

On the other side, Laverne Woods and Kobe Delima have lightened the load for senior QB Jaylen Zullo. The duo allow a mix of Delima and Woods to benefit the offense in different situations.

This means that the two defenses will need to step up, which is not exactly the most welcoming sight for either side.  Newberry’s defense has done enough to carry them when needed, such as an overtime win where the defense forced a field goal followed by a shutout win. The next game, the offense scored 41 points.

Taylor has similar numbers on paper, but a 19-point loss against Bell has shown openings. The Wildcats opened the season with two comfortable victories before falling to Bell on the road.

What Each Team Needs to do to Win

The same can be said for both sides. Run well, and stop the other team’s run.  The difference could be the quarterback play and how effective the defenses can be.

There is no denying that the two teams will rely on the run game to get points on the board. Newberry quarterback Jaylen Zullo has plenty more experience than his Taylor counterpart Slade Henderson, who much prefers to use his legs. Henderson has thrown only 30 passes total in the three games he has played this year, completing eight of those.

Newberry’s defense and Zullo will hope to take advantage of the passing game if they are to continue their streak of wins and a make a playoff push towards the season’s end.

Originally from Seminole in the Tampa Bay area, Kyle is a contributor for ESPN Gainesville as well as local NPR and PBS affiliate WUFT. Kyle wants to get into sports with a lofty dream of being a sports broadcaster. He was raised playing soccer and baseball while watching hockey and football, so the knowledge about various sports is fairly extensive.
@KyleFanslerUF
Previous Not the End for Eli Manning
Next Kara Scores Two Goals as Gators Win SEC Opener