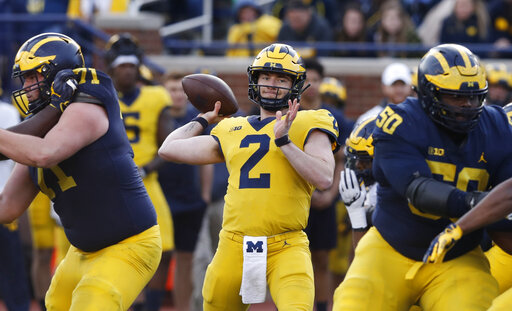 FILE- In this April 13, 2019, file photo, Michigan quarterback Shea Patterson (2) throws during the team's annual spring NCAA college football game in Ann Arbor, Mich. Patterson is back as Michigan’s starting quarterback, directing a new offense that is very familiar to him. The senior said the no-huddle, hurry-up offense scheme the seventh-ranked Wolverines will unveil in their opener Saturday against Middle Tennessee is a lot like the one he ran for two years at Ole Miss. (AP Photo/Carlos Osorio, File)

Its a Big 10 showdown early on in the season as Winsconsin will host Michigan in a game that can already impact the College Football Playoffs.

For the Wolverines, they go into this game without a win in Madison since 1993. Most of Michigan’s offensive talent returned, and the unit is under a new coordinator in Josh Gattis. Quarterback Shea Patterson leads one of the nation’s top groups and is accompanied by an elite receiving core. Not to mention, an offensive line that had four All-B1G contributors in 2019.

Going into Saturday, the Wolverines need to emphasize ball protection. Michigan cannot afford as many turnovers as they had in their first two games. With Patterson being at full health and the addition of a new left tackle, it should give the Wolverines better pass protection and increase the run game. Wisconsin has not given up a single point this season and ranks in top 10 for every defensive category especially the run game where they only allow 20.5 yards per game. When they met last fall, Michigan was able to rush 48 times for 320 yards.

On the other side of the ball, the Wolverines will be challenged with Wisconsin’s run game. In last year’s game, star running back Jonathan Taylor still averaged 6 yards per carry, though Michigans defense looked good. Wisconsin does not have the strongest passing game, so a key here could be forcing them to pass. The Badgers have the receivers but within the last two games, quarterback Jack Coan has not been successful in short-yardage plays. If the defense can come up big and stop the run game, Michigan’s offense can make some big plays and win this game.

To start, the Badgers have outscored opponents 110-0 in the first two games. Wisconsin has been a big 10 powerhouse for the past couple of years, but they will be looking to make a statement Saturday.

Led by All-American running back Jonathan Taylor, this Badgers offense is not one to mess with. Taylor himself already has 3 touchdowns and is probably the most elite back in College Football. Quarterback Jack Coan has been looking solid for Wisconsin as he has thrown for 564 yards, 5 touchdowns, and no interceptions. He also has some elite targets right next to him. Quintez Cephus leads the team with nine receptions for 169 yards and two touchdowns. A.J. Taylor, Danny Davis, and Kendric Pryor have combined for 20 receptions and 224 yards.

The Badger defense has looked dominant through 120 minutes. On Saturday, it will face off against the most talented offense it’s faced this year, but it is also an offense that’s had struggles of its own. After turning the ball over 12 times total in 2018, Michigan has five turnovers in its first two games of 2019. That’s something Wisconsin will look to take advantage of if it wants to avenge the 38-13 beatdown the Wolverines put on it in Ann Arbor last season.

This is one of the most anticipated games in the 2019 season. Both teams are elite teams with postseason hopes. A win Saturday will go a long way for the victor.

Catch this huge Big 10 matchup Saturday at noon on Fox. 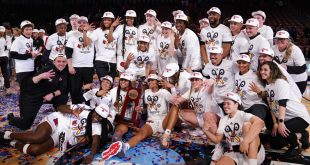 The No. 1 seeded Louisville women’s basketball team earned the last spot in the Final …