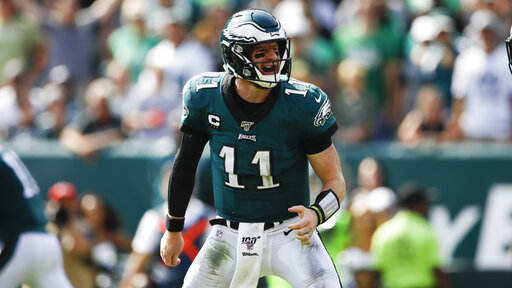 The undefeated Green Bay Packers host the 1-2 Philadelphia Eagles tomorrow, Sept. 26th, at 8:20 p.m. Philadelphia enters the game having just fallen to the Detroit Lions, while Green Bay is one of the NFL’s eight renaming unbeaten teams.

This season marked significant change for the storied franchise as Matt LaFleur replaced Mike McCarthy as Green Bay’s head coach. Three games into the season, LaFleur is the only first-year coach with an undefeated record. Despite the Packers’ success, including a 27-16 victory over the Denver Broncos last Sunday, LaFleur knows there are still areas where the team can improve.

One of the main reasons for Green Bay’s victories has been their defense. The Packers’ defense has allowed the second-fewest points in the league. For a team that was known for building through the draft as opposed to free agency, the Packers have seen results from players they added through the draft and through free agency. After signing with Green Bay in the offseason, linebackers Preston Smith and Za’Darius Smith have combined for seven-and-a-half sacks this season, including four in the victory over Denver.

Preston Smith has 3 sacks, and a forced fumble. Za'Darius Smith has 1 sack. Rashan Gary has another, and a fumble recovery. Darnell Savage has an interception.#Packers GM Brian Gutekunst had an #offseason.

Things have not been going as smoothly on the offensive side of the ball. Ranked 23rd in total offense, star quarterback Aaron Rodgers acknowledges that it is time for the offense to play better.

One specific area that Rodgers wants to see improvements with is the usage of star wide receiver Davante Adams. Last season, Adams finished sixth in receptions and seventh in receiving yards among all NFL players. This season, he’s 39th in receptions and 36th in receiving yards. Considering the Philadelphia secondary has allowed the fourth-most passing touchdowns, utilizing Adams more could pay huge dividends.

After winning the Super Bowl two seasons ago, the Eagles failed to reach the title game again in 2018. Despite starting 1-2 this season, head coach Doug Pederson is far from worried about how this season will turn out.

The Eagles travel to Lambeau Field for the first time since 2014, and Pederson is aware of how tough the home-field advantage might be for the Eagles.

Another factor working against Philadelphia is health. Among the players ruled out for the game include wide receiver DeSean Jackson, cornerback Ronald Darby and defensive tackle Timmy Jernigan, all of whom are starters. One player who will likely be suiting up for the game is starting wide receiver Alshon Jeffery, who missed a week due to a calf injury.

Reuben Frank of NBC Sports says the Packers will win 23-17:

“There’s a lot working against the Eagles this week. Short week. Injuries. A Hall of Fame quarterback with some speedy weapons. A very difficult stadium to win in as a visiting team. A much-improved Packers defense. It’s going to take 60 minutes to win, it’s going to take mistake-free football to win, it’s going to take an Eagles team taking advantage of every opportunity to make a big play to win. And so far through three weeks we haven’t seen any of those things. The Eagles are a talented team but a beat-up one and an inconsistent one, and that’s not a good formula to go into Lambeau on a short week. Maybe the Eagles will get this thing back on the rails soon, but I don’t think it’s going to be Thursday night.”

“Aaron Rodgers is the last quarterback a struggling Eagles defense wants to see, but Philadelphia might have even bigger problems on the other side of the ball in Green Bay. Unless the Eagles are able to manufacture a better rushing attack, or if Alshon Jeffrey returns to give them a needed boost in the passing game, they will have trouble scoring against the NFL’s second-best defense in terms of points allowed. The short week could be a factor, too, with the road team dealing with more injuries than the home team.”