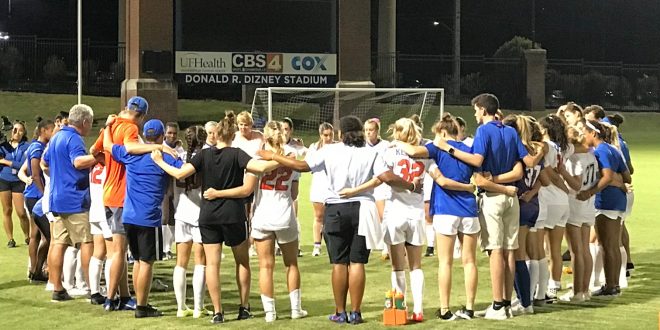 The Florida Gators improved to 2-0 in SEC play after a narrow 3-2 win over the Missouri Tigers. Vanessa Kara, Deanne Rose and Parker Roberts grabbed the goals for the Gators.

Here’s how Florida lined up to start the match:

Kara opened the scoring for the Gators in the 18th minute; unsurprising, given her recent goal-scoring record. She has six goals in her last four games.

Madison Alexander mishit her pass out to Sammie Betters, but the Mizzou defender misjudged the bounce of the ball. Betters collected, and rather than taking the one-on-one shot with the keeper, she elected to square it for Kara to tap home. A goal that these attackers have often crafted in recent games and opening weekend.

The Gators took their 1-0 lead into halftime. The second 45 would be much more action-packed.

An Eventful Second Half

Florida super-sub Deanne Rose got her side going early on in the second half, scoring after just seven minutes. Cassidy Lindley dropped into the midfield and played a beautiful left-footed through ball into the stride of Rose who made no mistake from inside the area.

The Tigers weren’t going to go down without a fight. With just over 25 minutes remaining on the clock, Macy Trujillo got one back with a clinically placed shot from just inside the box.

Ten minutes later, Parker Roberts would give the Gators a 3-1 lead. After cutting inside between two Mizzou players, Roberts unleashed a shot from just outside the area. It took a slight deflection off of a defender to fool the keeper, and Roberts secured her second of the campaign.

However, the Tigers kept fighting. With 10 minutes remaining, Sarah Luebbert stepped up and confidently put away a penalty. It wouldn’t be enough, though, as the Gators would end the game on top, 3-2.

“We’ve got to do a better job of managing the game,” said Burleigh. “We left some goals out there that could’ve put the game away earlier.”

“I think it was really good for us,” said Roberts. “It shows what we need to work on and that we need to maintain a lead when we have one.”

Next, the Gators will face former SEC champs Vanderbilt on the road. The match is set for Sunday at 1 p.m.