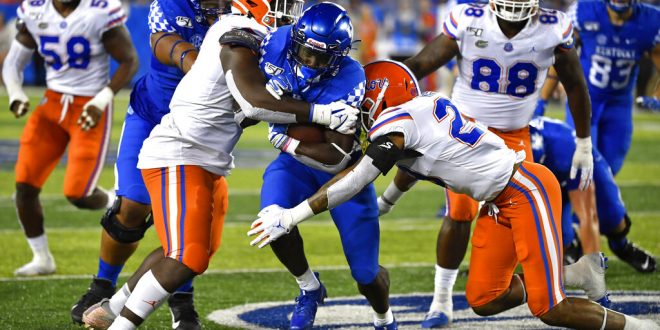 Gators football is one of the final undefeated teams in college football through four games. This weekend, the team has an excellent shot to go 5-0 when the FCS Towson Tigers come to town.

While Saturday’s game will likely be a fun game for Florida, the Gators must shift their focus. After Towson, Florida will play the most difficult schedule in FBS through the month of October, which will undoubtedly determine the outcome of the rest of the season.

The Tigers lost their first game of the season last weekend against Villanova. While you have to commend Towson for putting up 45 points of offense, consider the fact that the defense allowed a basketball score (52 points) from a basketball school.

The Gators are averaging 31 points of offense per game and allowing just 11. (The latter stat skews left due to UT Martin not scoring in the Swamp and Tennessee managing only a field goal. Kentucky scored 21 points, and Miami put up 20.)

Still, the game Towson is most akin to is UT Martin. If the Tigers do score, it is hard to envision a scenario in which they will put up a formidable fight.

Florida’s depth chart lists the usual suspects at starter but, as is true of most of the Gators’ matchups against FCS teams, the starting lineup will probably be out early.

With the thinness at cornerback (CJ Henderson will once again be a game-time decision), there is no reason to risk Marco Wilson’s health for longer than needed. The Gators are likely to run up the score, and keep its top performers on the bench for the rest of the game.

Plus, young Florida defenders seem to be doing fine all by themselves. Expect to see lots of CB Kaiir Elam and BUCK Khris Bogle. The former already holds two interceptions, and the latter logged two sacks. Outside of those freshman superstars,

Coach Dan Mullen said after the Tennessee game that he wished Emory Jones got more reps at quarterback against Tennessee. The Towson game will likely give Jones a chance to play, and give Gators fans another glimpse at “the future.”

Although Saturday will likely be more fun than anything for Gators players, Coach Mullen wants the guys getting better every week. After all, Florida’s upcoming slate is not just brutal — if, the rankings hold, the Gators will play three top ten teams in four weeks: the most difficult run in college football.

The first “week after that” Mullen refers to is Auburn. Next comes LSU for a game in Baton Rouge. South Carolina follows. Then, it’s Georgia. So you see, Florida’s matchup against Towson will do more than give the team another probable win under its belt.

It will be difficult to compare how the starters play against the Tigers with how they might play in the next month. But what the game can provide is a look at things like penalties and mistakes. Limiting pass interference or false start calls will show that Florida is locking in. More importantly, a strong October performance will determine whether or not the players’ dreams of contending for the national title are substantiated by production.