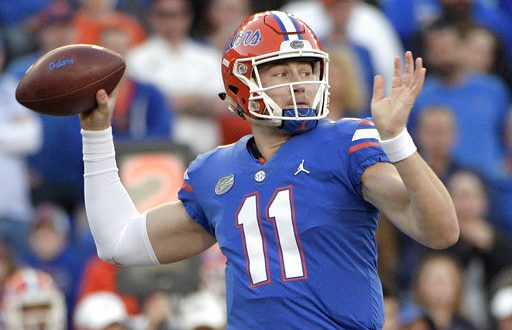 In just his second college start, Kyle Trask sets a new Gator football record in a 38-0 victory over the Towson Tigers Saturday night. Dating back to the game over Tennessee, Trask completed 18 consecutive passes.

Trask’s record breaks the previous record set by Chris Leak in 2005. Leak completed 17 passes in the Gator win against the Wyoming Cowboys.  Trask finished 18 for 20 with 188 yards before Emory Jones came in to finish the game.  Trask threw two touchdown passes and picked up a rushing touchdown in the game as well for good measure.

Gator running back Dameon Pierce said that Trask’s performance did not surprise him.

Who Says Getting a Zero Can’t Be A Good Thing?

It definitely is if you are the Gators’ defense. The Gators have shut out an opponent for the second time this season (the other being the 45-0 victory over UT Martin). The last time the Gators shut out two teams in a season was back in 2012.

That Gators team would eventually finish the regular season 11-1 (7-1 SEC) and made an appearance in the Sugar Bowl. The 2012 Florida Gators also finished in the top 10 of both the AP Poll (9) and the Coaches Poll (10).

However, this current Gator team is still looking to improve. Linebacker Jonathan Greenard said there are some small fixes the Gators still need to make for the rest of the season.

Sure, the Gators are not the only team to improve to 5-0 this week; but that’s the not point. This is the first 5-0 Gator football team since 2015. The Gators have won the Outback Bowl and the Peach Bowl since 2015, but no 5-0 starts. It isn’t necessarily an indicator of how the season will go, but it’s a noteworthy feat regardless.

If it means anything, the Gators have likely, at the absolute bare minimum, set themselves up for a bowl appearance early in the season.

Harrison is a sports coordinator at ESPN 98.1 FM/850 AM WRUF. He served as a beat writer for Florida Gators football for the 2019 and 2020 seasons. He also contributes to WRUF's Gainesville Sports Center segments and makes appearances on the Clash on Harp on Sports. Harrison has been a content writer for WRUF since January 2019 as well.
@HarrisonSmaj
Previous Gators Volleyball Sweeps Auburn to Start SEC Stint
Next Florida Claims Second Shutout at Home Against Towson Tigers, 38-0