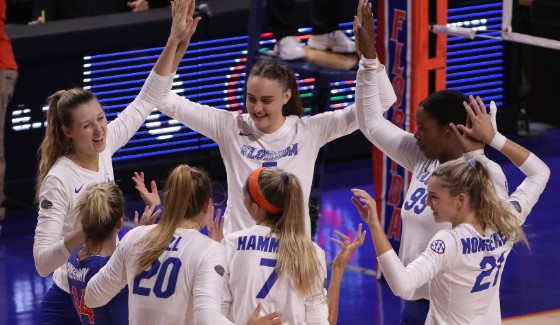 The win extended Florida’s winning streak to eight matches. In addition, they are riding a streak of five straight sweeps.

Different Ends of the Spectrum

Florida posted it’s highest hitting percentage of the year with a .427 performance as a team. Five different Gators hit .450 or better including a .714 night from middle blocker Rachael Kramer.

Gators head coach Mary Wise thought her team was locked in regarding the scouting report. She said most of that .427 hitting percentage came off first ball, but that could be related to the team’s struggles serving Friday night.

Thayer Hall posted her ninth consecutive match with double-digit kills against Auburn. Her 14 Friday night gives her 10 or more kills in all but one match this season.

“Not as clean as we would have hoped, Wise said. “But looking at the numbers from a hitting efficiency (standpoint), there was enough good ones to push us through.”

Meanwhile, Auburn finished the match hitting negative as a team at -.041. They tallied 19 errors to just 16 kills and were blocked seven times by the Gators.

Struggles with the Serve

Yes, the Gators out-served Auburn six aces to one in the match. But, Wise’s team hit a season-high 18 service errors as well. Allie Gregory had the most with five followed by Hall with four.

The last time Florida hit 18 service errors was in 2015 against Eastern Washington University at the Outrigger Resorts Volleyball Challenge in Honolulu, Hawaii. Mackenzie Dagostino had the match high with five errors that day.

Wise on the effects of service errors:

Florida stays at home for a Sunday match with the Georgia Bulldogs at 1 p.m. Wise said they are better offensive and serving team than the Tigers.

Coverage can be heard on ESPN 98.1 FM/850 AM WRUF or streamed on SEC Network Plus.