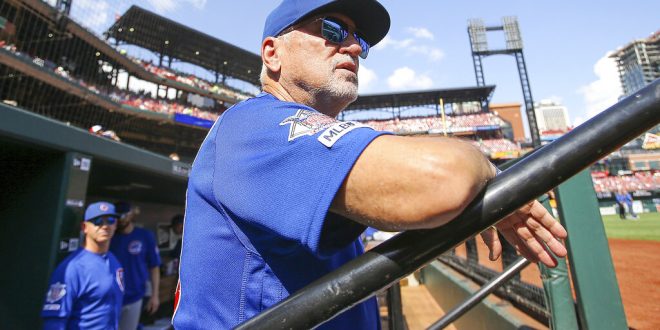 Chicago Cubs manager Joe Maddon looks out from the dugout prior to a baseball game against the St. Louis Cardinals, Sunday, Sept. 29, 2019, in St. Louis. (AP Photo/Scott Kane)

The 2019 MLB regular season has come to a close, and several teams are making a change at the manager position. Here are the teams in need of a new skipper.

Today, the Los Angeles Angels announced that Brad Ausmus will not return as manager in 2020. pic.twitter.com/XDGVCiG1gx

LA finished the season with a 72-90 record and fired manager Brad Ausmus after one season with the Angels. The Angels have only reached the playoffs once in the Mike Trout era–and they were swept out of the ALDS by the Royals. Without a playoff win, it seems their patience is growing thin.

With the recent departure of Joe Maddon, the Angels are the leading candidates to land the highly coveted manager.

Thank you for everything, Joe. pic.twitter.com/nl6av8Xkhi

With the departure of Joe Maddon, the Cubs will be looking for a replacement following the 2019 season. They finished with a positive record of 84-78.

Their search for a new manager is one of the more intriguing ones. Former Florida Gator and Chicago Cub, David Ross, has recently expressed interest in switching from broadcasting to managing.

The Giants had an emotional ending to the 2019 season. Bruce Bochy managed the team for the last 13 seasons but has decided to retire after a 77-85 regular season. Bochy’s career will be remembered for the positives, but for now, the Giants need to fill the vacancy.

Ex-Cubs Manager Joe Maddon is a potential successor for Bochy, but there will likely be a lot of competition to sign Maddon.

The Royals finished the season 59-103, which was good enough for a second-to-last place in AL Central. Following the season, manager Ned Yost decided to retire, leaving a vacancy at the position.

A potential candidate could be Vance Wilson, their current bullpen coach. However, former St. Louis Cardinals manager, Mike Matheny, seems to be the favorite to land the job.

For your time as our manager, your time in this community and for nine years of leadership.

The Pirates are going into the offseason with a lot of questions. After a rough second season collapse, they finished last in the NL Central with 69-93 record. As a result, they showed manager Clint Hurdle the door.

The Pirates will begin their search, but may not have to look far. Staying within the organization, the Pirates could promote special assistant Jeff Banister.

On September 21, the Padres dismissed Andy Green. They finished the season with a 70-92 record, which resulted in a last place finish in the NL West.

The Padres should not panic when hiring a new manager. They have a team with a lot of young players that aren’t going anywhere anytime soon. This is expected to be one of the most coveted job vacancies.