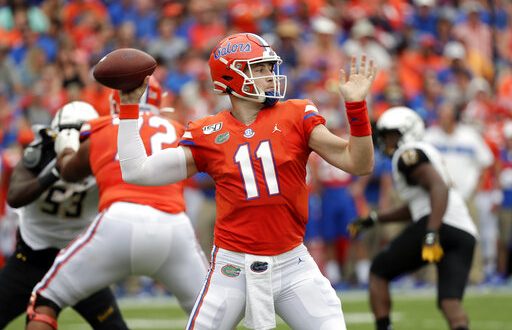 It’s been 12 years since the Auburn Tigers have traveled to the swamp. This top ten matchup of two undefeated SEC teams will be a huge test for Florida and especially for Trask.

The junior quarterback made his way into the record book during last Saturday’s shutout over Towson. The Gators beat the tigers 38-0 and Trask threw 18 straight completions, breaking Chris Leak’s record of 17 set against Wyoming in 2005. Trask finished 18 of 20 for 188 yards and 0 turnovers before Emory Jones took over in the fourth quarter.

Freshman quarterback Bo Nix and the Tigers come into the Swamp with a 5-0 record. Auburn’s offense has really evolved behind Nix, who completed 16 of 21 passes (76.2 percent) for 335 yards and two touchdowns without an interception in last Saturday’s 56-23 win over Mississippi State. Defensive back Jeremiah Dinson leads the Auburn defense with a total of 34 tackles and 1 interception on the season.

The Gators have averaged 34 points per game and have held their opponents to 8.80 per game. Handling Bo Nix and the Tiger offense will be a huge key for the Gators.

Leadership is Key to a Win on Saturday

“I mean as a quarterback, you’re definitely one of the leaders of the team and I think as a quarterback I need to just keep pushing the tempo for those guys and stay on them. Making sure that we are all communicating with each other and are very clear what we are trying to execute every play”

Trask has shown poise, accuracy and sound decision-making. He will be a huge factor in deciding whether the Gators can beat the 7th-ranked Tigers. The quarterback has thrown for 647 yards this year with only two interceptions. The way he leads this team and conducts the offense will set the tone for the game’s outcome.