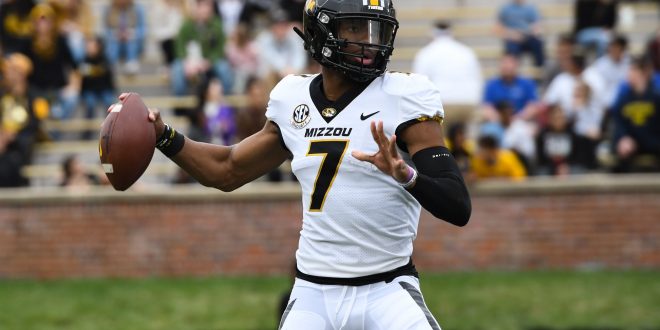 It might not seem like it, but one of the nation’s top offenses will face off against one of the nation’s best defenses this weekend. On Saturday, Oct. 5, the 2-2 Troy Trojans travel to Columbia, Missouri to take on the 3-1 Missouri Tigers at 3 p.m. With 513 yards per game, the Trojans rank 12th in the country, while the Tigers have surrendered 213 yards per game, the third-fewest in the country.

Missouri has only faced one conference opponent so far; they defeated South Carolina 34-14 two weeks ago. The victory was the team’s third consecutive win.

One of the reasons for the Tigers’ three-game win streak is their stout defense. Despite a 37-31 loss to Wyoming in the season opener, the Tigers have allowed the second-fewest plays that were 20 yards or more. Head coach Barry Odom knows his defense will never be perfect, but he attributes statistics like those to a ‘next man up’ mentality.

“You know there’s going to be a time or two that there’s a breakdown and then you better count on the other guys to get to the ball because you know that you can have a mishap or a missed assignment or misplay but if you have great effort all the way around it, typically you’re going to be able to get that down.”

The Tigers are also tied for third in interceptions within the SEC. Linebacker Nick Bolton and Safety Ronnell Perkins lead the team with two interceptions each. Odom says that aside from playing faster and preparing harder, most of the interceptions come from his players just being in the right position at the right time.

“I don’t know that we’ve developed better hands, but it’s been guys have been in position, there’s been contested balls. And we’ve ended up coming up with them.”

On the offensive side of the ball, former Clemson quarterback and current Missouri starter Kelly Bryant has tossed eight touchdowns this season, tied for fourth among SEC quarterbacks. Aiding Bryant is running back Larry Rountree III, who has the fourth-most rushing touchdowns in the conference.

Despite an even record, Troy’s offense has been one of the best in the country; they have averaged 40.8 points, good for 13th in college football. Quarterback Kaleb Barker has been a huge reason for the Trojans high-flying offense. The senior quarterback has thrown 13 touchdowns and just two picks, which is the most in the Sun Belt and the tenth-most in the NCAA. Odom acknowledges Barker’s ability as a passer and a runner.

“He is as talented of a guy as we’ll see all year and he can make every throw. He’s got really a level of confidence in the way that he plays. He bounces back up if he has a mistake or whatever it was right back. He runs really well. He’s a really good football player.”

While Troy has found success on offense, the Trojans’ defense has been another story. They have allowed 29.5 points per game, the 30th-worst rank in college football. Still, Troy does not lack playmakers on that side of the ball. Linebacker Carlton Martial has 43 tackles (second-most in the Sun Belt) and 7.5 tackles for loss (most in the Sun Belt). One thing Odom notices about Martial is his uncanny ability to space the field.

The Trojans have only played the Tigers three times back in 2002, 2004 and 2005. Missouri holds a 2-1 series record and enters Saturday’s game as the 25-point favorite.