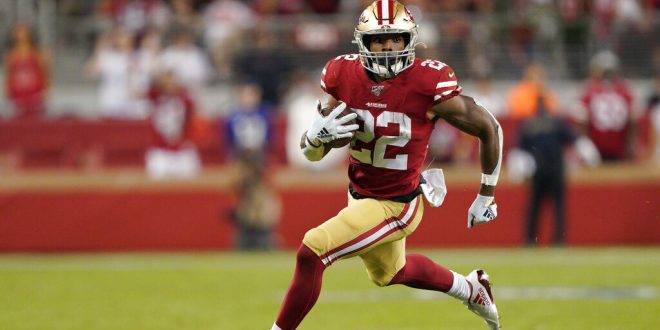 San Francisco 49ers running back Matt Breida (22) runs against the Cleveland Browns during the second half of an NFL football game in Santa Clara, Calif., Monday, Oct. 7, 2019. (AP Photo/Tony Avelar)

The San Francisco 49ers imposed their will on the Cleveland Browns on Monday night with a 31-3 win to improve their record t0 4-0.

On the first play from scrimmage for the 49ers, Matt Breida took an 83-yard run to the house to put San Francisco up 7-0. The 49ers never looked back.

San Francisco’s offensive line put on a clinic last night. The team rushed for a whopping 275 yards and quarterback Jimmy Garoppolo was sacked just twice. This has been the theme of San Francisco’s perfect start, as the Niners lead the league with 200 rushing yards per game. Here is what Head Coach Kyle Shanahan had to say about his team’s ability to run the ball.

The only issues from the 49ers offense came from Garoppolo’s inconsistency and Robbie Gould’s rough night. Garoppolo finished 20/29 for 181 yards and two touchdowns. At certain points, he looked uncomfortable in his drop-backs and missed some easy throws. In addition, Gould, usually a reliable kicker, missed three field goals on the night. Even with this, San Francisco still dominated.

As good as San Francisco’s offense was, their defense might have been better. The 49ers won the battle in the trenches all night long which included four sacks, six-and-a-half tackles for loss and eight quarterback hits. San Francisco’s defensive line put on a show. Garoppolo commented on how he thought his team played.

Second overall pick and rookie Nick Bosa was the standout on San Francisco’s defense. He was the anchor on defense, finishing with two sacks and five quarterback hits. He even imitated Baker Mayfield’s infamous celebration of sticking the flag in the field. As you may recall, Mayfield stuck the Oklahoma flag on Ohio State two years ago. However, Bosa got the last laugh on Monday night.

What’s Wrong with the Browns?

After a strong finish to last season and a multitude of high-profile signings this offseason, the Cleveland Browns find themselves in a tough spot. Mayfield had arguably the worst game of his career, 8/22 passing for 100 yards and three turnovers, and the offense has had no rhythm to start the season.

Maybe it was the high expectations or the fact that teams now have tape on Mayfield. Whatever the case is, Cleveland needs to figure out their issues as they enter a tough stretch on their schedule. Mayfield had more to say on his team’s performance last night.

Will History Repeat Itself?

The last time the 49ers started 4-0 to open a season was in 1990. That team would go on to finish the regular season 14-2 and lose in the NFC Championship game. The 1990 49ers were led by a strong running game and a stingy defense. It’ll be interesting to monitor how the rest of their season plays out.

Both teams face tough opponents in week 6. The Browns welcome in the Seattle Seahawks while the 49ers put their undefeated record on the line in a tough road test against the Los Angeles Rams.