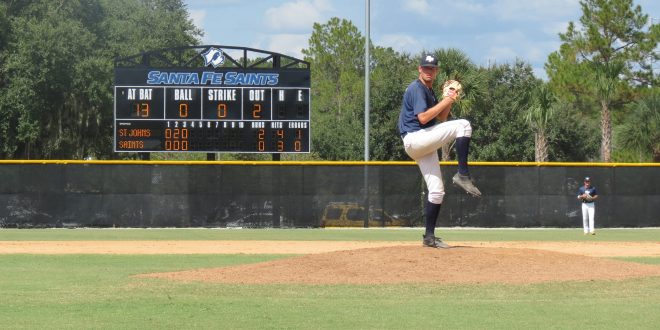 This past Wednesday, Gainesville’s Santa Fe Saints hosted a double-header against St. Johns River State College in preparation for their Spring season. The first game began at 2 p.m. and ended with a tie game with a 2-2 score. The second game began at 4:15 p.m. where the Saints defeated the Vikings with a 3-1 score.

The Vikings started strong in the first game with a two-run lead early in the top of the second inning. The Saints were not able to tie the game up until the bottom of the sixth inning. Santa Fe Coach Wiggs moved a new pitcher to the mound every two innings.

Pitching for the Saints during the first game was Anthony Arguelles, JC Lovelace, Lance Bolton and Emanuel Fernandez.

The Saints were able to step offensively during the second game. Coach Wiggs said, “Chase DeMichele and Zeb Marquis both had big doubles while Parker Aultman knocked both of them in with sac flies.”

Pitching for the Saints during the Second game was Brad Lord, Devin Hemenway, Jake Blair and Mario Garcia.

The Saints fall roster carries an astounding 15 pitchers. Coach Wiggs explained that “I am trying to give as many guys as possible the opportunity to show me what they can do.”

Overall, the pitchers performed a great game only giving up two earned runs in the total 14 innings. In addition, they had a combined 21 strikeouts and only walked four Vikings players. “It’s early in the fall so we are slowly bringing along our pitchers and building up their pitch count,” said Wiggs.

The St. Johns River Vikings will be returning to Gainesville for an additional double-header this Wednesday, October 9.  Then, at the end of the week on Sunday, October 13 the sophomores on the Roster will compete at the FCSAA Sophomore All-Star Game and Showcase in the Lakeland Marchant Stadium.

Parker Welch is a Junior at the University of Florida majoring in Sports Media at the College of Journalism & Communications.
@parkerrwelch
Previous Monday Night Football: San Francisco Looks to Make Statement
Next 49ers Stay Perfect, Shut Down Browns on Monday Night

“Jacksonville was much better than us, they were much tougher than us, and I thought …