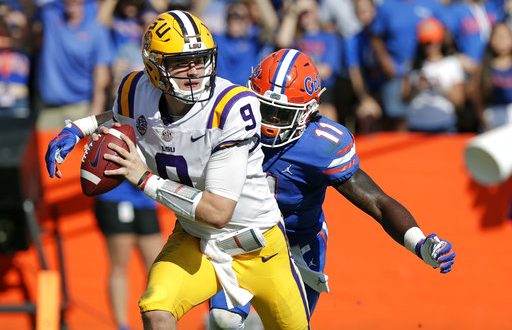 No.7 Florida Ready For Challenge Against No. 5 LSU

After a convincing 24-13 victory over the Auburn Tigers, the No.7 Florida Gators look to tougher challenge against the No. 5 LSU Tigers.

Florida will travel to Death Valley this Saturday to taken on the undefeated Tigers.

In 2016, the Gators walked away with a 16-10 victory after shutting down the LSU offense on a fourth goal at the goal line.

4th-and-1. Last play of the game. #UFvsLSU What do #Gators do when they're challenged?

Florida may have history on their side but they are going up against a more dynamic and talented LSU team. Additionally, the Florida offense didn’t have head coach Dan Mullen calling the plays.

Drowning out the Noise

Playing in Tiger Stadium, also known as Death Valley, will be a brand new experience for some players. However, quarterback Kyle Trask is familiar with the noises of Death Valley.

With the capacity to hold 102,321 fans, Death Valley has earned it’s spot as one of the most difficult stadiums to play in. Despite this number, Trask says the key to Florida’s success this Saturday is concentrating on communication.

One of the toughest match-ups for the Florida defense will be facing LSU quarterback Joe Burrow. Although Florida has faced Burrow in the past, the Heisman hopefull has developed into a more effective passer.

Linebacker David Reese noted that the main difference between this LSU offense and last year’s is their use of the pro-style offense.

The last time the Gators faced LSU, the Tigers relied more on their running game. However, the LSU offense has developed a stronger passing game under Burrow.

Burrow currently ranks second in the nation for total passing yards and total touchdowns. The quarterback records a total 1,864 yards and 22 touchdowns this season.

Florida defensive coordinator Todd Grantham commented on difference between the LSU offense and the Auburn offense.

This top-ten battle will be featured on College GameDay with kick-off set for 8:00 p.m.