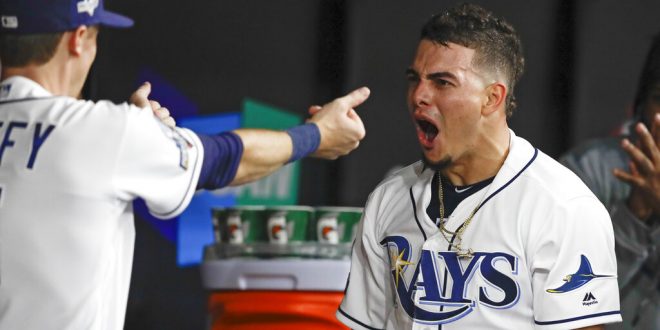 Rays Beat Up Verlander to Force Game 5 of ALDS

The Tampa Bay Rays came out of the gates firing in Game 4 of the ALDS against Justin Verlander and the Houston Astros. Coming into the game, Houston had a 2-1 series lead over the Rays. However, thanks to a big first inning at the plate and clean pitching from top to bottom, the Rays forced a fifth game with a 4-1 win on Tuesday.

The #Rays have won back-to-back home games in a #postseason series for the 1st time since the 2008 ALDS. pic.twitter.com/nYKbAHW8FI

Verlander Shaky from the Mound

Houston’s ace only lasted 3.2 innings on the mound before he left the game. In the first inning alone, the Rays put up three on the scoreboard.

Verlander started the night well. He struck out the first batter he faced, Austin Meadows, who has been on a tear in recent weeks. However, that’s when things went south.

Tommy Pham came to the plate and smacked a line-drive homer to left-center field. Then, with runners on first and second and two out, Travis d’Arnaud singled to left to score one. The damage wasn’t done there, as Joey Wendle would hit an RBI-double to seal the third run.

Verlander allowed four hits in the first inning. For context, the Rays gave up six in the entire game.

After the first, Verlander and the Astros would largely settle down. Although the Rays would continue to get hits, Houston’s pitching staff was able to get their way out of potentially dangerous situations.

Meanwhile, Tampa’s slingers were dealing. Of the six pitchers to appear, Colin Poche was the only one to allow a run.

Avisail Garcia and Pham had standout performances at the plate for the Rays. Garcia went 4-5, and Pham went 3-5 with his home run in the first inning.

Ahead of the game, Rays manager Kevin Cash challenged his players to attack Verlander early in counts to ensure he didn’t find a groove.

Game 5 of the ALDS is scheduled for Thursday at 7:07 p.m. at Minute Maid Park. Prior to that, on Wednesday, the St. Louis Cardinals and Atlanta Braves and the Washington Nationals and LA Dodgers will face off to decide who goes through to the NLCS.