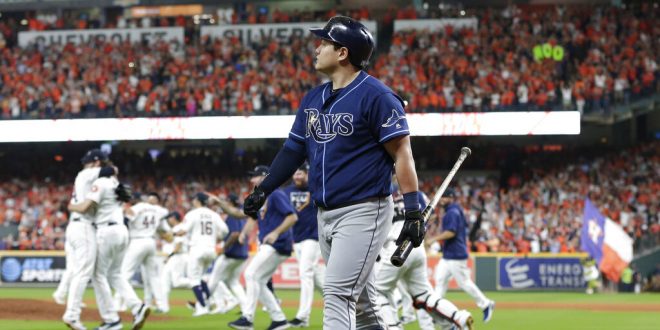 After dropping the first two road games, the Tampa Bay Rays were able to come back and win two games at home to force a deciding Game 5 on Thursday night in the American League Divisional Series, but they could not sustain the momentum on the road as the Rays drop a 6-1 decision to the Houston Astros.

After the Astros were unable to wrap up the series in Tampa, the Rays were down to their final chance. It was a do or die situation as Rays pitcher Tyler Glasnow stepped up to the mound Thursday night.

Unfortunately, Glasnow had a tough first inning where he gave up four runs to Houston. He would give out five hits early to give the Astros a 4-0 lead. Things were still in reach for the Rays however, as long as they could put up the runs to match.

On the first pitch of the second inning, things began to look up. Eric Sogard hit a solo homer to right to get the Rays on the board. However, this hit would be one of the only two that Astros pitcher Gerrit Cole gave up the rest of the game.

After taking out Glasnow in the middle of the third, Tampa Bay tried to piece together their pitching. This seemed to be an adequate answer at the time. After an uneventful third inning, Ji-Man Choi was able to pick up the second hit for the Rays. He would be stranded at first though after two strikeouts and a ground out from Cole.

The Rays were able to keep things from escalating and the score remained 4-1 through the bottom of the eighth. After putting in Emilio Pagan, the Astros hit back to back home runs from Michael Brantley and Jose Altuve to extend their lead 6-1 and that ended up being the final score.

Cole had a much different outing than Glasnow. While Glasnow struggled, Cole was tremendous.

Glasnow started off the night with a five hit, four run first inning. During his 2.2 innings pitched, he had just three strikeouts and ended with a 7.71 ERA for the postseason; this after having just a 1.78 ERA during the regular season.

Cole was pretty much untouchable for the Astros. Besides the homer in the second inning, no Rays player was even able to get into scoring position the entire night. He ended the night in the eighth inning, allowing two hits with two walks and 10 strikeouts.

After Glasnow came out, the Rays used nine pitchers to try to stay in the game.  This seemed to work considering the Astros did not score again until the bottom of the eighth.  However, the damage was already done and Tampa Bay’s season came to a close.

Despite the loss, the Rays had a successful season and there is a lot to build on for continued success next year.   Houston meanwhile advances to the American League Championship Series where they will play the New York Yankees.