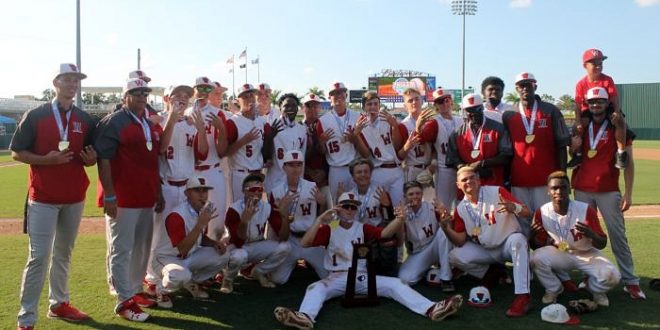 Weston Smith, a senior at Williston High School, faced many obstacles en route to becoming the starting first baseman for the varsity baseball team. On the day after Christmas in the sixth grade, Smith’s life was changed when he got into a freak ATV accident. Jim Smith, father of Weston and Williston High School Athletic Director, recalls the moment he saw his bloody son lying in his neighbor’s driveway.

“At that point, I thought we had probably lost our son,” Smith said.

At the hospital, doctors discovered a piece of Weston’s skull that had gone into his brain as a result of the accident. This would require neurosurgery the next morning.

Following the surgery, the surgeon gave Weston a 50/50 chance to live. At that moment, Weston’s family truly understood the severity of the injury. “It was a very traumatic experience for everybody involved in our family,” Smith said. As for Weston, he was completely unaware of what had occurred upon waking up from the surgery. “I just remember waking up in the hospital, pulling out all my cords when I woke up, not knowing where I was”, Weston Smith recalled. Although he remained in intensive care for the next two weeks, Weston began to show signs of life.

It wasn’t until six months later that the piece of skull that had been removed during the surgery was replaced. During this time period, Weston Smith could not participate in any physical activities. The lack of training resulted in a significant amount of muscle loss, and brought his progress as an athlete to a halt. Fortunately, Smith was able to return to physical activities during his eighth-grade year.

While his recovery was slow at first, Weston made great progress as a freshman in high school. This can be attributed to Weston’s strong worth ethic as well as the support from his friends and family. As it pertained to athletics, Weston regained much of his strength in the gym. Athletic trainer, Price Harris, “pushed him hard in the weight room”, Jim Smith explained. This coupled with lots of baseball practice ultimately allowed Weston to secure a spot in the starting lineup for the baseball team his junior season.

Looking ahead to the spring, Weston will start at first base and pitch in the starting rotation for Williston High School. He’ll look to improve on his 5 hit season from a year ago and finish his high school career on a high note. As the 2020 season approaches, Weston and his teammates share one common goal. That goal is to defend their state title from a year ago. “We all have that one dream of going back-to-back”, Weston said. From a life-threatening ATV accident to starting for the high school baseball team, Weston Smith has epitomized the ability to overcome adversity and is an inspiration for all.

Hello, I am currently a junior at UF studying sports media journalism with a concentration in Political Science. I contribute web and radio content weekly for WRUF ESPN Gainesville. Be sure to check out some of my recent articles!
Previous Florida Volleyball Bounces Back With Win Over Arkansas
Next Newberry Panthers Win Seventh Straight