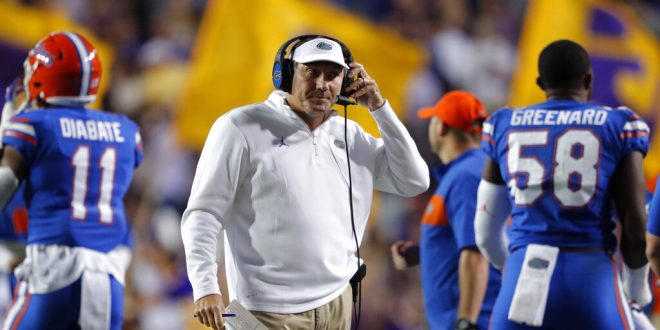 Florida Gators head coach Dan Mullen spoke to the media on Monday about the loss to LSU. During the presser, Mullen touched on ways the team can grow and improve, and also what they can do better moving onto an unranked South Carolina.

Coach Mullen opened up to the media today by starting with a short injury update. Injuries can catch up to any and all teams, Florida being no exception. Unfortunately, the Gator’s pass rush took a hit on Saturday. Specifically, Jonathan Greenard and Jabari Zuniga. A right ankle sprain pulled Greenard out of the game against LSU and Zuniga reignited a Week 4 ankle injury, limiting his playtime.

“We’re probably the furthest thing away from that in America of staying injury-free this year,” Mullen said. “But our guys, having to deal with adversity and come through that, have continued to perform and find a way to win games despite all of the injuries that we’ve had to deal with.”

Altogether, the Gator’s allowed 218 rushing yards to LSU, almost double the yards allowed against Auburn. Greenard leads the team in sacks with 4 along with 6.5 tackles for loss. Zuniga follows in sacks at 3 in just 4 games this season.

The first loss of the season hangs heavy over the Gators. Florida went shot for shot up against an elite LSU offense, but couldn’t keep up with the shootout. After LSU ran away with score after score in the second half, the Gators lost their momentum. Undeterred, Mullen knows how strong Florida can rally and rise above a harrowing loss such as this. Referring to the 2018 season, when Florida lost to the Missouri Tigers and how that changed the team’s dynamic. He reminisced on how the team came back to win four straight games following the loss, including the Peach Bowl.

Mullen on how the team handles a loss such as this:

Looking Ahead to South Carolina

The Gamecocks’ season has been resurrected following their upset victory over (the now) No. 10 Georgia Bulldogs. South Carolina put on a show, almost costing their quarterback, freshman Ryan Hilinski, to a knee injury. South Carolina head coach, Will Muschamp, spoke to the media and confirmed that Hilinski will be playing on Saturday. As for the two-quarterback system, both Florida’s and Carolina’s, Mullen recognizes the similarities. He acknowledges the “flavor” multiple quarterbacks can bring to an offense.

When questioned on Will Muschamp and the Carolina defense, Mullen said he notices the talent of the front, going so far as to compare them to the LSU defense he just faced. Carolina is packing some powerful, veteran linebackers and playmaking corners. Altogether, mixed with a coach that is able to keep an offense on edge, and Carolina might turn out to be a team with a sleeper defensive ability.

Mullen on USC defense and Muschamp:

The Florida Gators are set to play the University of South Carolina Gamecocks on Saturday 10/19 at noon. You can be sure to check here for total coverage of all the action.