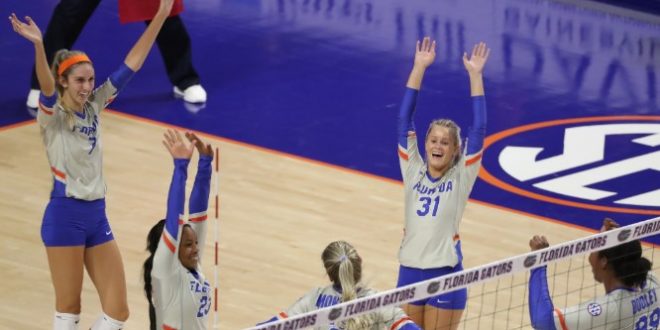 Florida Gators volleyball battled the Texas A&M Aggies to five sets and came out with a victory. They overcame a 9-3 advantage in the fifth set to claim the win.

This win helps Florida keep pace with Kentucky in the SEC. Meanwhile, the Gators move to 4-1 all-time against the Aggies in five sets and are 3-1 in five-set matches this season.

Florida also ended the match without having an advantage in kills, points, blocks, service aces, assists or digs.

Florida won the first two sets in competitive fashion. The Gators held the advantage for most of set one after it started 6-6. Mary Wise’s team had the set lead all the way up to 23-19.

A&M tied it up 23-23 after a 4-0 run but Florida notched the set after an Aggie service error and a Paige Hammons kill.

Both teams traded points and went back and forth in the second set. The set again found itself tied at 23, and Florida grabbed the set win with back-to-back blocks.

The Aggies jumped out to leads in sets three and four that Florida couldn’t overcome. Florida went down 13-3 in set three and couldn’t cut the deficit to less than eight to fall 25-14. Set four started 6-1 A&M with Florida eventually losing 25-15.

They finally came back in set five. After going down 9-3 in the 15-point set, Florida stormed back for a 12-9 lead and traded points with A&M to earn the victory.

Thayer Hall paced the team again in kills with 18 and her 13 digs gave Hall her eighth double-double of the season. Hammons had a double-double as well, finishing with 10 kills and 10 digs.

Rachael Kramer threw in seven kills on .278 hitting and was credited with seven blocks. She passed Kelsey Bowers to move to seventh all-time with 429 career blocks.

Take a look back at today’s match with @hallthayer02!#GoGators pic.twitter.com/gwalKuCoBT

Marlie Monserez made an impact all over the stat sheet on Sunday afternoon. She recorded three kills, assisted on four blocks and had six digs to go with her 41 assists.

Florida is back at home Wednesday night for the first time in about a month. They’ll face the South Carolina Gamecocks at 8 p.m. Coverage of the can be seen on the SEC Network and heard on ESPN 98.1FM/850AM WRUF.