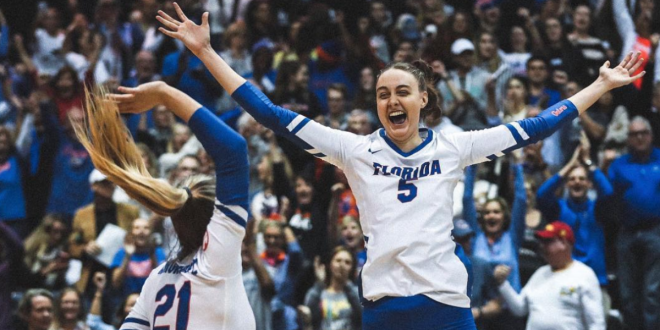 The No. 13 Florida Gators volleyball returned home to take down South Carolina in three sets.

The match proved to be an offensive battle between Florida and South Carolina. A total of 16 players from both teams recorded at least one kill.

The Gators offense was led by outside hitter Thayer Hall and middle blocker Lauren Dooley. Hall led all Florida hitters with 11 kills against the Gamecocks.

South Carolina’s Mikayla Shields and Mikayla Robinson led the offensive attack for the Gamecocks. Shields and Robinson combined for a total of five kills in the opening set.

Despite the offensive battle, Florida took the first set 25-17.

Both teams carried offensive momentum into the second set.

Robinson continued to be a strong offensive presence for South Carolina, adding another six kills in the second set.

In a must-win third set for the Gamecocks, Florida and South Carolina went point for point before Florida took a 6-3 led.

South Carolina rallied to tie the set at 7-7 before Florida regained the lead.

This would be a lead that the Gators would carry, taking the third set 25-19.

Florida volleyball will continue conference play on Sunday, Oct. 16 as they take on the LSU Tigers in Baton Rouge. The opening serve is set for 2 p.m.

You can listen to live coverage of the Gators’ matchup on ESPN 98.1 FM/850 AM WRUF or tune into the SECNetwork+.

Previous Yankees Look to Even Up ALCS
Next Gators WR Trevon Grimes: “LSU Was One of Our Best Offensive Performances”