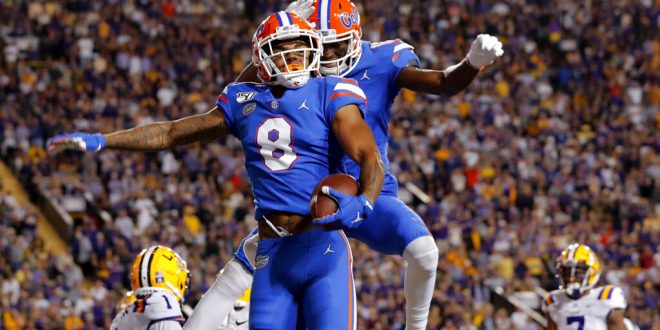 Gators WR Trevon Grimes: “LSU Was One of Our Best Offensive Performances”

Despite a tough loss to the LSU Tigers (6-0) in Baton Rouge last weekend, WR Trevon Grimes has lost no confidence in his team’s ability to put points on the board.

Florida’s (6-1) first loss of the season, while undoubtedly disappointing, was by no means a shameful loss. Dan Mullen’s team showed fight and showcased their strengths in a tough SEC road environment. With just under 11 minutes left in the 3rd quarter, Florida even found themselves up seven points (28-21).

The senior finished the game 21-24 for 293 yards and 3 touchdowns. To boot, LSU’s running back, junior Clyde Edwards-Helaire, racked up 134 yards on just 13 carries last Saturday.

Mullen and his coaching staff surely didn’t have to search too hard to find out where it went wrong for them in Louisiana. The Gators’ defense simply faltered for arguably the first time this season.

What shouldn’t be overlooked is the manner in which Florida’s offense was able to consistently move the ball, maintain possession and put points on the board. Grimes certainly hasn’t.

The junior receiver shed some light on some of the things Mullen has brought to Florida’s offense since his arrival.

The Good from Baton Rouge

Florida’s offense was a mighty, nearly unstoppable, force to be reckoned with for most of last Saturday’s game.

QB Kyle Trask completed 59 percent of his passes and threw for 310 yards and 3 touchdowns. It might not have been his best nor his most efficient game under center, but he and the offense kept pace with Burrow and LSU for three quarters.

Trask also wasn’t helped by Florida’s rushing attack much in Baton Rouge. The Gators averaged only 3.7 yards per carry. Senior RB Lamical Perine was bottled up for the majority of the night.

It was also pleasant for Florida fans to watch QB Emory Jones come on the field and throw a touchdown in his cameo. Jones also rushed the ball nine times for 36 yards.

Grimes touched upon the quarterback position ahead of this weekend’s game against South Carolina.

Grimes also managed to reach the end zone for the first time this season against the Tigers. His first trip to the “promised land” could see him feature more heavily in Florida’s offense going forward.

How the Gators rebound from their first loss will be crucial in determining the fate of their season. They’ll be on the road again Saturday when they take on South Carolina at Williams-Brice Stadium.

The result might not have fallen in Florida’s favor in Louisiana, yet Grimes and the rest of the team still know that the Gator offense is no laughing matter.