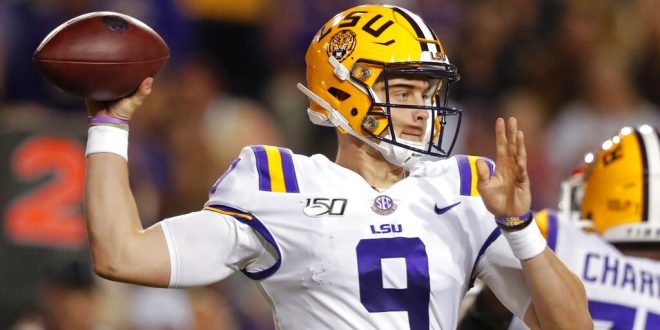 Saturday’s SEC West tilt between No. 5 LSU and Mississippi State is one of two teams heading in opposite trajectories.

LSU (6-0, 2-0 SEC) has been an unstoppable juggernaut thus far. The Tigers have scored 52.5 points per game, which leads the country. Quarterback Joe Burrow is a Heisman Trophy candidate. LSU has already won big games against No. 11 Texas and No. 7 Florida.

Mississippi State (2-4, 1-2 SEC), on the other hand, is trending in the opposite direction following a 20-10 loss to a struggling Tennessee team. The Bulldogs have struggled to replace three former first-round picks on defense from last year (Jeffery Simmons, Montez Sweat and Jonathan Abram), and the offense has been even worse.

One Week at a Time

After a huge 42-28 victory over the Gators, it would be easy for LSU to take Mississippi State lightly. The Bulldogs were dominated by Auburn in a 56-23 loss and have also lost to Kansas State and Tennessee.

However, South Carolina’s upset victory over then-No. 3 Georgia last weekend is a reminder that anything can happen any week in the SEC. Even on a down year, Starkville has always been a hostile environment for visiting teams.

The last time the Tigers visited Davis Wade Stadium, Mississippi State smacked LSU 37-7. It was the Bulldogs’ first win at home against LSU since 1999 and just their second overall in that span.

LSU’s offense is its greatest advantage in this matchup. Burrow has already thrown 25 touchdown passes, six more than he had all of last season. He is also 737 passing yards away from tying his mark from last season. Additionally, Burrow has completed 79.6% of his passes this season.

The offense was finally tested last week against the Gators and proved that its offensive performances this season were more than playing bad defenses. The Tigers had over 500 yards of offense despite only having the ball for nearly 22 minutes.

It wasn’t just Burrow and LSU’s stacked wide receiver corps getting the job done, either. Running backs Clyde Edwards-Helaire and Tyrion Davis-Price combined for 174 yards on the ground and three touchdowns. LSU’s offense didn’t have the ball for very long as it didn’t take very long to score against the Gators.

The Tigers’ defense hasn’t been as stellar as in years past, but it has mostly gotten the job done. It sits sixth in the conference in points allowed but fourth in yards per game.

The same cannot be said for Mississippi State’s offense.

Part of the problem is that Mississippi State still hasn’t decided on a starting quarterback. Senior Tommy Stevens and freshman Garrett Shrader have split time under center after Nick Fitzgerald graduated. Stevens started last week, but he was pulled at halftime with the Bulldogs down 10-3 after throwing two interceptions and completing six of 11 passes for 67 yards.

Shrader wasn’t much better. He did fire a touchdown pass but threw for just 79 yards and only completed 50 percent of his passes.

Running back Kylin Hill is the only redeeming part of the Bulldogs’ offense. The junior has over 600 rushing yards this season and is averaging over five yards per carry this season. He was bottled up against Auburn and Tennessee (58 rushing yards combined), but it is expected he’ll be used early and often against the Tigers.

Mississippi State’s defense, which sits 10th in the SEC in yards per game and 11th in points allowed, will likely be tasked to make a few stops early on to keep this one close. However, that seems unlikely given its struggles against Auburn and the quality of LSU’s offense.