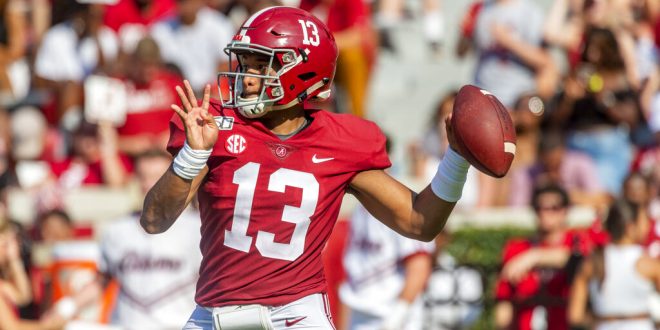 It probably comes with little surprise that the Alabama (6-0) is almost a five touchdown favorite over the Volunteers (2-4), according to BetMGM. After all, Alabama is coming off a 47-28 beat down of then-ranked No.24 Texas A&M. Tennessee secured a surprising win against Mississippi State last week. However, this is the same team that lost to Georgia State and only amassed three points against Florida.

The quarterback position has been a mess for the Volunteers this season. Jarrett Guarantano was expected to take a step forward after a strong sophomore campaign. Highly touted in high school, Guarantano now finds himself riding the bench as a backup. Freshman Brian Maurer took command of starting duties against Georgia. However, things are up in the air against Alabama.

Maurer sustained a concussion against Mississippi State. He has been practicing but hasn’t been medically cleared to play. Whoever gets the start under center will have to face a formidable Crimson Tide defense.

While not as dominant in years past, Alabama does rank 44th in pass defense in the FBS. Alabama head coach Nick Saban realizes he has a young defense. He’s happy with the progress but knows there’s still much to improve.

While Alabama isn’t as defensively dominant as usual, its offense is extremely potent. The Tide rank sixth in yards per game and second in points per game.

Having an average defense is enough to blow teams out when the offense is scoring over seven touchdowns per game. A decent portion of the offensive success is due to the Crimson Tide’s ability to execute the run-pass option.

Tennessee head coach Jeremy Pruitt said Alabama may be the best team in the country at the RPO.

Alabama has won the last twelve meetings against Tennessee, outscoring the Volunteers 152-38 in the last three. The Vols will have their hands full once again with a high-scoring Crimson Tide offense. It looks like an almost certain win for the heavy favorite Crimson Tide. Crazier things have happened in college football, though.