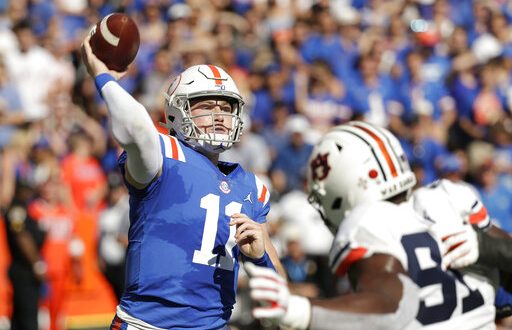 Gators Football ready for a challenge at South Carolina

Besides the fact that the Gamecocks (3-3) are likely looking at this game as a true measuring stick of a turning point this season, a noon kickoff on the road against a team with less overall talent and success this season could spell trouble for Florida. Not to mention, the one regular-season loss likely kicks the team out of College Football Playoff contention. Simply put, this game could be the Gators’ “trap game” of the season.

However, the South Carolina matchup gives Florida a huge chance to show how much it has matured in a year. Last season, the team overestimated itself early in the season and lost to Kentucky. Then, the Gators lost to Georgia, kicking them out of the SEC Championship Game. One week later, Florida fell to Missouri and cited dejection from the loss at Georgia as part of the reason why.

Coach Mullen has a vested interest in bringing swagger back to the Swamp. Players with swagger look past a close away loss to the nation’s second-ranked team and focus on the task at hand. Gators safety Donovan Stiner goes a step further to say the loss at LSU makes the defense more ready for success this weekend.

We didn’t like how we played, clearly. But, it makes us hungrier. I think we want to get out there and prove that that’s not what it will be.

Trask is up to the Task. Will He Continue to Deliver?

It is worth noting how poised Trask looked during his performance in Death Valley. Despite a lower completion percentage than Heisman front-runner Joe Burrow, Trask threw for more yards and the same amount of touchdowns. The LSU game was also Trask’s first start on the road. The South Carolina game will be just his second, but Trask’s calm demeanor is one of his most valuable intangibles as a quarterback.

One of Trask’s weaknesses lies in his pocket awareness. Florida’s offensive line is nothing to write home about this season. But sometimes, Trask has time to get the ball out; He just sits on it until a sack would be imminent for almost any quarterback. Auburn had the strongest defensive line the Gators have faced to date, anchored by consensus All-America midseason defensive tackle Derrick Brown. Saturday, Trask will go head-to-head with another (though, not consensus) All-America midseason DT in Javon Kinlaw. Kinlaw has five sacks, three QB hurries and 18 tackles on the season.

Gators offensive coordinator John Hevesy knows containing Kinlaw does fall on the offensive line, but he thinks the line’s progression puts it in a good position.

If the offensive line does its job, a likely level-headed Trask can lock in with more of a feel for who is coming at him.

Outside of the Georgia win, the Gamecocks have been lackluster this season. Most of their pitfalls can be blamed on an extremely difficult schedule. But even so, the team is not exactly tearing up the field.

However, there are some weapons outside of Kinlaw. A strong running back duo of Rico Dowdle and Tavien Feaster can muscle through for extra yards and break off in the event of a missed tackle, which is something Florida is struggling with defensively.

Gamecocks coach Will Muschamp says starter Ryan Hilinski should be a go Saturday despite taking a low hit against Georgia that manifested itself into a knee sprain. Hilinski, a true freshman, is not the most complete passer. But, once he is able to connect, he can make big plays. If his injury nags, Dakereon Joyner can step in. Joyner, while completing just over half of his passes, had the juice to seal the win over Georgia.

The most commonly targeted Gamecocks receiver is Bryan Edwards, who is averaging more than 70 yards per game. While 71 ypg far surpasses the 53 ypg of Florida’s receiver with the highest average ypg, Freddie Swain, Gators Van Jefferson and Kyle Pitts catch 52 and 47 ypg, respectively. South Carolina’s next highest-average-catching receiver sits at 39 ypg.

The Gators and the Gamecocks will kick off at noon Saturday on ESPN.