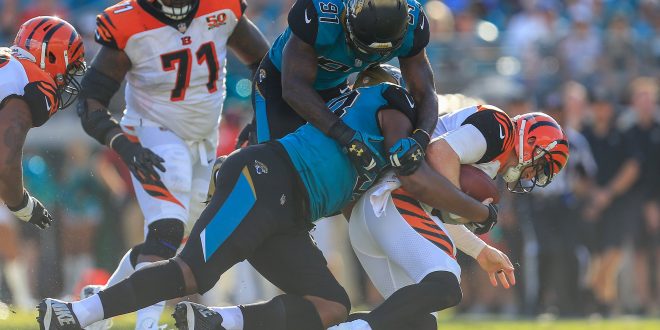 After a less than stellar showing against the New Orleans Saints, the Jacksonville Jaguars will try to bounce back against the winless Bengals.

The last time these two teams met, things were very different. On Nov. 5, 2017, the Bortles-led Jaguars defeated the Bengals 23-7.

On Tuesday, Oct. 15, the Jaguars traded Jalen Ramsey to the Los Angeles Rams for a slew of draft picks. This came after Ramsey requested a trade earlier in the season, and sustained a back injury that held him out ever since.

Jaguars Head Coach Doug Marrone says that he and Ramsey had a good relationship.

Getting Out of a Slump

With a disappointing performance against the Saints where the offense failed to find the end zone, the Jaguars need a spark to reignite Minshew Mania. Against New Orleans, Minshew threw for less than 200 yards and threw an interception.

Minshew spoke to the media about the Jaguars’ struggles.

The Jaguars could be without Dede Westbrook, who is recovering from a shoulder injury. In a shallow receiving core headlined by DJ Chark, the Jaguars may need to rely on Leonard Fournette and the running game on Sunday.

Jacksonville is not taking Sunday’s match up lightly. According to Minshew, the Bengals have are impressive up front on defense.

Defensively, the Bengals rank 31st in yards allowed per game. The only team worse in that statistic is Miami.

Bengals All-Pro Wide Receiver A.J. Green is not expected to play in Sunday’s game. The seven-time Pro Bowler injured his ankle in training camp and required surgery. He hasn’t played in a game this season, which has undoubtedly hindered the Cincinnati offense.

Knowing that the Bengals cannot pass down the field, defenses are able to key in on their running game. Cincinnati ranks last in the NFL in rushing yards per game with 56.5.

Bengals Head Coach Zac Taylor said on Thursday that Green is day-to-day with his injury.

Without Green, the Bengals’ offense ranks 26th in yards per game, and 28th in points per game.

Kickoff is at 1 p.m. in Cincinnati.

Steven Walker is a beat writer for ESPN Gainesville and is currently studying Journalism & Sports Media at the University of Florida.
@swalker_7
Previous Gators’ Soccer Ready for “Fired Up” Auburn
Next Saint Francis Catholic Hosts Trinity Christian Academy in a Non-Conference Showdown