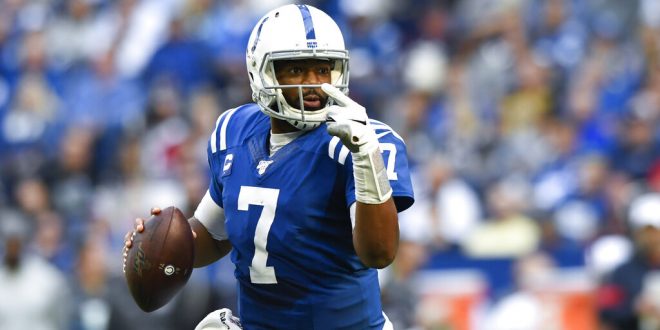 Indianapolis Colts quarterback Jacoby Brissett (7) looks to throw during the second half of an NFL football game against the Houston Texans, Sunday, Oct. 20, 2019, in Indianapolis. (AP Photo/Doug McSchooler)

It’s Week 8 of the NFL season. And right now, the Indianapolis Colts lead the AFC South. While there are leaders for every division, the Colts leading the AFC South is, quite arguably, pretty special. That’s because former Florida Gator quarterback Jacoby Brissett has taken over the helm of the Colts’ offense, after serving as the backup for multiple seasons. He was in the shadow of Andrew Luck, who, to the surprise of many, decided to retire before the 2019 NFL season began.

That left the AFC South with questions. How would the Jaguars square up? What about the Texans, now that Luck was out of the picture? And perhaps most important to Indianapolis fans, would Brissett have what it takes to keep this Colts team competitive for a postseason run? With seven weeks under his belt, Brissett continues to shine for the Colts, week in and week out, as the team now sits at 4-2 and leads their division.

The story of Jacoby Brissett

Brissett donned a Florida Gator uniform for two seasons, before transferring to NC State in 2013 after losing the starting quarterback job to Jeff Driskel. During his time in Gainesville, he played in 13 games. He threw three touchdowns, but also had four interceptions.

He was drafted by the New England Patriots in 2016, serving as the backup to Tom Brady before being traded to the Colts. He played in the 2017 season when Luck was out with an injury. During that time, he posted over 3,000 passing yards.

Just two seasons later, he’s now at the helm as the official starter. And his numbers this year don’t disappoint. This season, Brissett has thrown 14 touchdowns and just three interceptions. The 6-foot 4-inch quarterback has thrown for nearly 1,400 yards as well. In last Sunday’s win over the Texans alone, he had a four-touchdown performance and 326 yards of total passing.

This leaves the Colts sitting at undefeated in the AFC South. Despite Brissett’s success, and the team success as a whole, he remains very humble. He said he was ready to take the leadership role as the Colts quarterback and to improve on the field every week.

He also credits his success to the offense around him. One namely being wide receiver Zach Pascal. Though he has just 13 catches for three touchdowns on the season, he’s averaging nearly 20 yards a catch. In Sunday’s win, he had six catches and tallied two touchdowns. The 24-year-old is just in his second season, but Brissett had high praise for his offensive asset.

So far, it’s clear Brissett has shined for the Colts. He’s done well at home and on the road. One of those road wins was at Kansas City against Patrick Mahomes and the Chiefs. But they’ve still got ten games left in the 2019 regular season. Two of the biggest games left in the Colts’ regular season will be in December, when they face both the New Orleans Saints and the Carolina Panthers. Those teams are the top two leaders in the NFC South.

But this week, they host the Denver Broncos with kickoff set for 1 p.m.