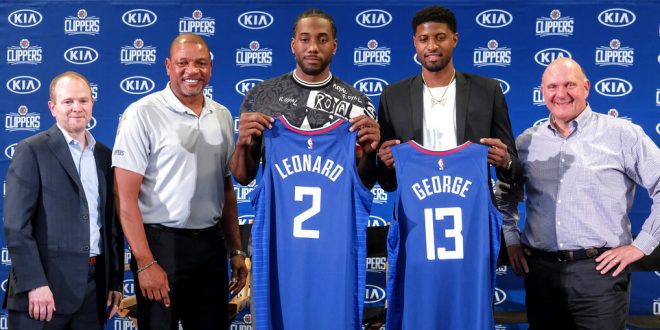 The Toronto Raptors will host the New Orleans Pelicans for the 2019 NBA season opener on Tuesday night. The two LA teams, Lakers and Clippers, will also face off tonight with their new-look teams.

Been waiting a while to say this…

The defending champion Raptors will open up the 2019 NBA season against the New Orleans Pelicans in Toronto. Both teams have new identities after the departure of some big-name players.

Kawhi Leonard left the Raptors in free agency to play in LA for the Clippers, leaving the Raptors shorthanded for the season. Pascal Siakam will attempt to fill Leonard’s shoes as the leader of this team. The Raptors signed Siakam to a four-year $130 million extension to keep the ascending star in Toronto for the foreseeable future.

New Orleans also had a change of scenery when they dealt superstar Anthony Davis to the Lakers. Unlike the Raptors, the Pelicans were able to acquire plenty of assets with the departure of Davis. Lonzo Ball, Brandon Ingram, Josh Hart and several draft picks were all part of the trade to help the rebuilding Pelicans. However, the biggest addition came when they selected Zion Williamson in this year’s draft. Unfortunately, they will be without Zion for the first six to eight weeks due to a knee injury.

Life without Williamson will be a tough task for the Pelicans. Players like Ball will have to step up and lead this team while Williamson is sidelined.

The late game will feature plenty of big-name players including former stars from the Raptors and the Pelicans.

Fans will get their first look at LeBron James and Anthony Davis playing together in a meaningful game. The new duo has given Lakers fans optimism for a title run after missing the playoffs last year.

James and the Lakers will be eager to get back into the playoffs. Last year was the first time James missed the playoffs since his rookie season back in 2003.  It is also the first time he missed the finals since 2011. The addition of Davis gives James a proven star to help carry this team, while Kyle Kuzma continues to improve.

Meanwhile, the Clippers also have a new-look team and plenty of optimism. Signing last year’s Finals MVP, Kawhi Leonard, and bringing in Paul George puts the Clippers in position to make a run towards the Finals. Leonard is coming off an incredible one-year stint with the Raptors that resulted in Toronto winning their first championship.

As of now, Los Angeles features two teams with tons of potential and high expectations, so it is only fitting for the two teams to face off on opening night.