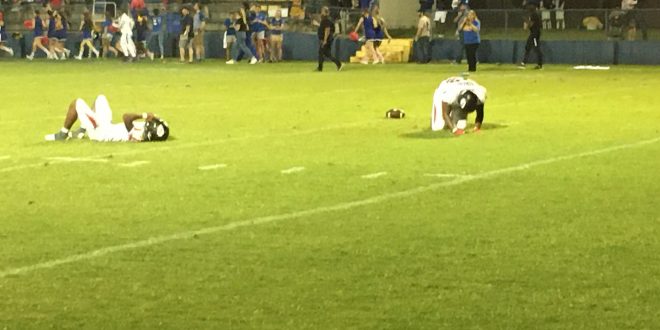 Fort White players react to their Indians coming up just short against the Newberry Panthers in Double Overtime.

On senior night, the Newberry Panther football team (9-1) celebrated with a blue out on their regular season finale against Fort White (3-6).

Things certainly looked blue for the Panthers when they found themselves down 22-0 at the half against the Fort White Indians.

Fort White did well to make the Panthers struggle on Friday night in the first half.

Two non-offensive touchdowns and a safety went along with a drawn out drive for a score that made the Panthers look like they were not the 8-1 team their record showed.

Newberry has made a knack for scoring early and often this year. In games along this now nine game win streak, the Panthers have had first halves where they have scored 49 points and 59 points. The Indians were having none of it.

“[Fort White has] great coaches and great athletes, they were going to play hard,” Newberry head coach Edward Johnson said. “We needed that.”

Coach Johnson must have delivered a vigorous speech at halftime, because the Panthers came out in the second half and showed why they are 9-1 and playoff-bound.

Newberry slowly sliced the lead down, with Makai Johnson scoring a touchdown on a quarterback run midway through the third quarter to get the Panthers on the board. Then, with 11 minutes remaining in the game, a second rushing touchdown for the Panthers made it suddenly a one-possession game. With 3:49 left, Makai Johnson found JJ Harper for a score, and then the ensuing two-point conversion tied the game.

Fort White took the ball and drove it down deep into Newberry territory, but Houston Crews’s field goal try sailed right allowing the game to go to overtime.

In the first overtimes, both teams scored fairly easily, albeit Newberry needed all four downs for Makai Johnson to dunk it in from a yard out. However, both teams had their PAT’s blocked, making the score 28-28 entering the second overtime.

Newberry scored on the second play of their possession in double overtime, and when Fort White got the ball, they too scored with relative ease. However, Indians coach Demetric Jackson went for the win, unsuccessfully.

A tough way to lose for a Fort White team which has kept many of their games close this season, just failing to close it out in the end.

Newberry’s coach Johnson knows how well his team has done this season.

“1-9 to 9-1, that’s all you guys,” Johnson said, addressing his team post game. “The work you put in from the beginning, keep working for it.”

Jaylen Zullo lost his starting role at quarterback midway through the season. He was proud of the way his team persevered in the second half. The senior was relieved his Senior Night was not capped off by a loss.

“Way to come back in the second half, defense way to hold up,” Zullo told his teammates. “Thanks for sending me out with a win, I love y’all.”

The Newberry Panthers can start looking forward to the playoffs.

Originally from Seminole in the Tampa Bay area, Kyle is a contributor for ESPN Gainesville as well as local NPR and PBS affiliate WUFT. Kyle wants to get into sports with a lofty dream of being a sports broadcaster. He was raised playing soccer and baseball while watching hockey and football, so the knowledge about various sports is fairly extensive.
@KyleFanslerUF
Previous Gators Volleyball Cruises Past Tide in Sweep
Next Gators Face Gamecocks on Senior Day 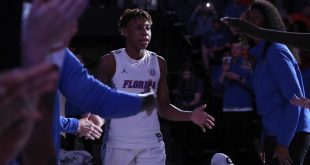