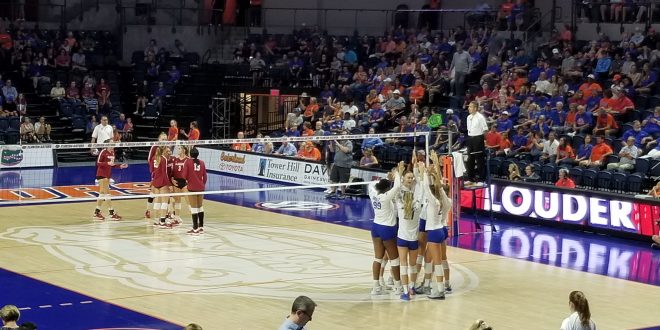 At one point, Nelly’s “Hot in Herre” played over the speakers in the Stephen C. O’Connell Center. That might be the best way to describe Florida Gators volleyball on Friday night.

The 13th-ranked Gators swept the Alabama Crimson Tide 25-18, 25-16, 25-16 for their fifth win in a row and third-straight sweep. Florida stays tied in terms of conference record atop of the SEC standings with Kentucky and Georgia with the win.

Florida’s first set started out as a back-and-forth affair with the Tide taking a 5-4 lead early. But a stellar service run by Paige Hammons, including two aces, helped Florida claim the lead 9-5. That’s when the flood gates opened.

The Gators got so hot they could melt fire. They torched Alabama with a .522 hitting percentage with Hammons and Thayer Hall leading the way. The duo combined for 11 kills and a .785 hitting efficiency in Set 1.

ICYMI: Catch up with @HallThayer02 after tonight's 3-0 sweep! #GoGators pic.twitter.com/bt7hJERvIz

Hall and Co. continued to pour it on in the second set. A 5-1 run with Hall at the service line to start the set later ballooned into a 15-8 advantage at the media timeout. A 7-3 run out of the break put the set out of reach for the Tide as Florida eventually took Set 2 25-16. Florida finished hitting .375 in the frame.

Middle blocker Lauren Dooley pitched in three kills in Set 2 alongside Hall’s four. Dooley finished the match with seven kills on a .545 efficiency. She said postmatch she spent time in practice working on the attacking part of her game.

The service line again helped Florida take control in the third set. Another service run by Hammons at 7-5 allowed Florida to achieve and maintain a comfortable lead to the end of the final set. Hammons finished with four of Florida’s eight aces Friday night.

“We had a really good night behind the service line, which set the tone for the match,” Wise said.

Thayer Hall also had a “really good night.” She posted 15 kills on 31 attempts. But, that’s not the impressive part. She did all of that and didn’t have a single attack error on the night.

Those 15 kills ties Hall with middle blocker Darrielle King for the most kills in a match without an error this season. King posted 15 kills on 19 swings in the five-set win over Long Beach State.

Florida might’ve been on fire offensively, but it took time for the defense to get going. Even though Florida hit a combined .447 in Sets 1 and 2, it still allowed Alabama to hit near .300 as a unit. And it won’t be like Florida can count on an offensive performance like it had consistently.

Libero Allie Gregory said the team was able to start poorly and great instead of “starting bad and ending bad.”

“Our defense definitely struggled a little bit in the first two sets,” Gregory said. “I’m proud of us for finding adjustments and getting better in that entire match.”

Wise said the team didn’t start making better decisions in the front and back rows until the third frame. Wise’s team did hold the Tide to just .091 in the third set. They had just eight total blocks on the night. Rachael Kramer, Dooley and Hall had multiple block assists.

“There were some good moments,” she said. “The goal will be that we’ll need everybody’s A-game come Sunday.”

Previous P.K. Yonge Football Ruins Williston’s Homecoming with a 43-16 Victory Over the Red Devils
Next Newberry Football Rallies Against Fort White in Double Overtime For Win