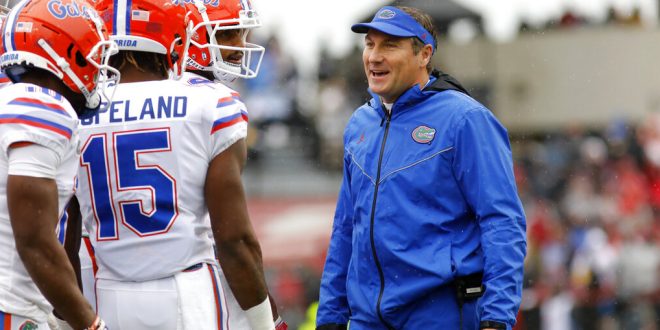 After a much-needed bye week, the Florida Gators now prepare for the annual trip to Jacksonville.

“The World’s Largest Outdoor Cocktail Party,” it was once called. Later, some attempted to rename it the “River City Showdown.” It didn’t stick.

Now, it’s just the Florida-Georgia game (or Georgia-Florida, if you ask UGA fans).

Regardless of what it’s called, the heated rivalry game is one of the biggest showdowns in the SEC each year. This year is no different, with both Florida (No. 6) and Georgia (No. 8) ranked in the Top 10, vying for the SEC East title and a trip to Atlanta.

The junior injured his shoulder in the Gators home-opener against UT Martin and has been in a sling on the sidelines since. Both Greenard and Zuniga suffered high-ankle sprains against LSU and Kentucky, respectively.

All three players are listed on the depth chart for Saturday.

Mullen said having Greenard and Zuniga back is huge. The pair are a nightmare for opposing quarterbacks, combining for seven sacks and 10.5 tackles for loss this season. Getting them back for Saturday’s game is ideal timing for the Gators, and the fans know it.

The #Gators defense hasn’t intercepted the ball since the Auburn game.
With the possibility of Jonathan Greenard and Jabari Zuniga returning against #Georgia, we could see the D-Line forcing Jake Fromm to make some bad decisions. #GoGators #UGAvsUF

Florida’s defense will need to keep an eye on Georgia’s junior running back D’Andre Swift.

The Philadelphia native had 21 carries for 179 yards and two touchdowns against Kentucky on Saturday. On the season, he’s accumulated 752 rushing yards (second in the SEC) and seven rushing touchdowns.

But Swift isn’t just his last name. It’s how he operates.

“He’s one of the best backs, if not the top back, in college football right now of speed,” Mullen said. “Can make you miss in the open field.”

Despite Saturday being quarterback Kyle Trask‘s first start against Georgia, Mullen isn’t worried about his ability to execute the game plan.

“This is our third top-10 matchup this year,” he said. “He’s already played in the other two. One at home, one on the road, and this is in the middle.”

Fellow teammate and wide receiver Josh Hammond is also confident in his quarterback.

Josh Hammond on Trask: he's always been a guy that's poised and calm, doesn't let his emotions come out until game day. Puts us in a position to be successful.

Even Georgia head coach Kirby Smart had praise for Trask.

“Kyle has done a tremendous job coming in and taking over and not skipping a beat,” he said. “He’s more athletic than you think he is. He does a good job running it. Dan always does great with his quarterbacks.”

The Gators and Bulldogs will square off at TIAA Bank Field in Jacksonville on Saturday at 3:30 p.m.

Camille Woodhouse is a Sports and Media student at the University of Florida College of Journalism and Communications. In the past, she has covered the Atlanta Falcons and Florida Gators football for various sports news outlets. She is an Atlanta native and a fan of football.
@CJW_SportsRadio
Previous LSU Takes Over No.1 Ranked Spot, Jumps Alabama
Next Steelers Complete Comeback, Beat Dolphins on Monday Night