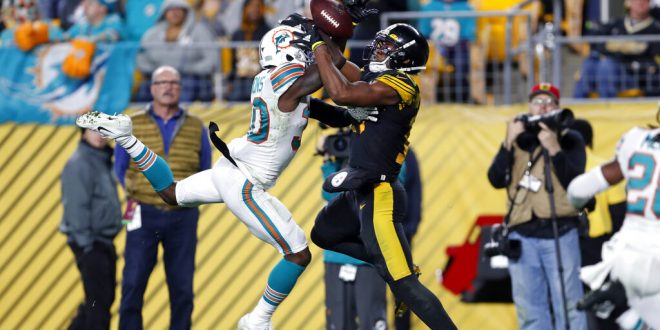 Pittsburgh Steelers wide receiver JuJu Smith-Schuster, center right, hauls in a pass from quarterback Mason Rudolph before taking it for a touchdown with Miami Dolphins defensive back Chris Lammons (30) defending during the second half of an NFL football game in Pittsburgh, Monday, Oct. 28, 2019. (AP Photo/Keith Srakocic)

For a moment, it looked like the Miami Dolphins might be able to pull out their first win of the season. Then, the Dolphins became the Dolphins and the Steelers were able to pick up a win in front of their home crowd.

The Dolphins came out firing controlling the pace of the game on both sides of the ball early on. An early Xavien Howard interception set up Miami with good field position to score the games first touchdown. Pittsburgh struggled to make even the simple plays early on and Miami took full advantage.

The Dolphins would go up 14-0 bringing on a reign on boos from the home crowd. Miami hadn’t led a game by double digits the entire season.

Turnovers, dropped passes and penalties defined the majority of the first half for Pittsburgh. But with just under three minutes to go in the first half, the Steelers began to strike.

A Chris Boswell field goal with 2:45 left in the first half put Pittsburgh on the board. Then with less than 30 seconds to go in the half, the Dolphins do something only they can do. On a 3rd & 20, Miami brought an all-out blitz and paid the ultimate price.

This felt like the turning point in the game as a crowd of boos turned into cheers. Take a listen to what Steelers QB Mason Rudolph had to say on his team’s resiliency.

The second half was all Pittsburgh with the Steelers taking full control of the game. JuJu Smith-Schuster had his best game of the season recording first first 100-yard receiving game. He finished with 103 yards on five receptions including this touchdown grab.

James Conner also had a big day for Pittsburgh rushing for 145 yards and a touchdown on 23 carries. This was his first 100-yard rushing performance of the season.

It was the Steelers defense that kept Miami bottled up throughout the second half. The defense finished with four sacks, 10 QB hits and two forced fumbles. It’s interesting to note that Steelers defensive back, and former Miami Dolphin, Minkah Fitzpatrick had two interceptions last night. He was traded to Pittsburgh earlier in the season for a first round pick.

Even though he was productive in the first half, Ryan Fitzpatrick finished just 21/34 for 190 yards, two touchdowns and two interceptions. He talked about not giving up even through a rough season.

The Dolphins will attempt to get their first win of the season when they welcome in the New York Jets next week. The Steelers stay at home as they look to get back to .500 when they take on the Indianapolis Colts.