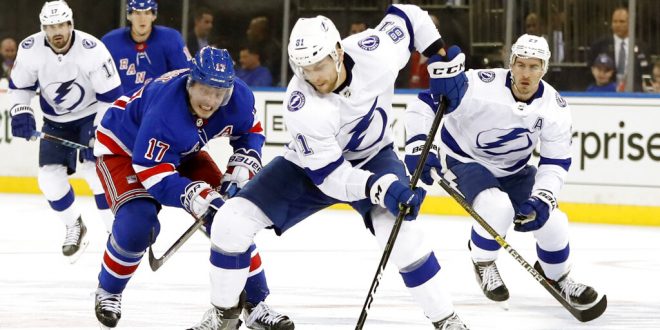 The Tampa Bay Lighting look to finish their back to back games with a win. The lightning are coming off a loss at New York, but will try to bounce back against the New Jersey Devils on Wednesday.

While the Lightning might be needing a break from all the traveling, the Devils should feel energized after having four days.

Both teams are in the Eastern Conference and the Lightning sitting in the fifth spot in the Atlantic Division. Meanwhile, the Devils are in last place in the Metropolitan Division. Tampa Bay has a 5-4-2 record and New Jersey has a 2-5-2 record. The lightning are currently on a two game losing streak.

Last Game Against the Rangers

The Lightning’s Kevin Shattenkirk played against his old team, the New York Rangers on Tuesday, but was unable to get a win. The Lightning lost to the Rangers 4-1.

On returning to MSG: “The first few shifts are going to feel a little funny, but you move on. Once someone on the other team is taking a run at you, it’s just another hockey game.”#TBLvsNYR | Kevin Shattenkirk: pic.twitter.com/5vpphNclJP

The game was tied at 1-1 through the second, but late in the third the Rangers were able to score three points with 6 1/2 minutes left.

The Devils are coming off a loss against Arizona 5-3.

Steven Stamkos has been the points leader for the Lightning. Stamkos has made twelve points from five goals and seven assists. Right wing, Nikita Kucherov, has also been playing really strong for the Lightning. He’s put up eleven points with four goals and seven assists. During the last game against the Rangers, Kucherov scored the only goal for the lightning in the first.

There are also four players with the Lightning that have registered seven assists so far this season. The players include Mikhail Sergachev, Victor Hedman, Nikita Kucherov and Steven Stamkos.

For the Nationals, Taylor Hall is the teams points leader. He’s put up with seven points from one goal and six assists.

The Lightning will be taking on the Devils at 7 p.m. Wednesday night.