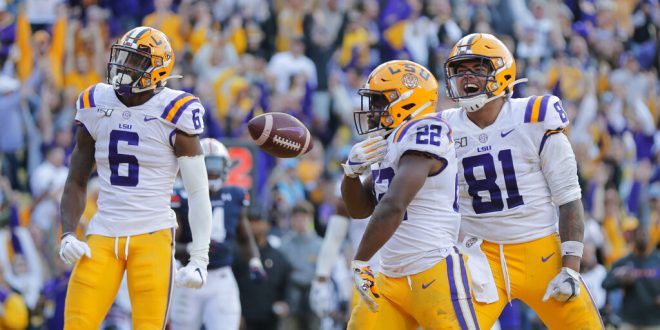 LSU vs Bama: The Bye Week

LSU and Alabama have one of the most crucial bye weeks in college football. They are preparing for the highest ranked game of the season where the No. 1 and the No. 2 team, respectively, will face off on Nov. 9.

Ed Orgeron, LSU’s head coach, commented on how the team needs to be focused. He stated how they should avoid Twitter and the online trap of saying unneeded statements. Simply, let the football game do the talking.

Joe Burrow: The LSU QB who is currently projected to go top 10 in the 2020 NFL draft.

The transfer student from Ohio State came to LSU for the 2018 season. In his first season, he threw for 57% completion rate. He turned that number around to an astonishing 78% for this 2019 season. As a result, his running attempts have been cut in half in light of his success passing.

He has already topped the single season passing TD record in LSU history once held by Matt Mauck.  This bye week could give him time to settle and relax to prep for this important game.

Tua Tagovailoa: The injured Alabama QB is set to possibly return for this ranked matchup.

After sitting out in their win versus Auburn, Nick Saban commented that they are keeping an eye on his recovery in anticipation of his possible return. Orgeron also commented that the team expects his return. He is another athlete in the midst of a breakout season and this matchup, if he returns, could be the cherry on top.

With a passing completion of 74%, he is projected to be picked in the top 10 of the NFL draft (possibly to the Dolphins). Above all, he is also a semi-finalist in the 2019 Maxwell Award.

Orgeron also commented on the abilities of Tagovailoa today.

These two weeks will be filled with hype and news regarding the game.

Both teams will be preparing heavily and planning during the bye week for the game ahead. Saban usually keeps his team quiet and reserved in the time before the game, not allowing the opposition any room to comment. It is a great opportunity for both teams to refresh and regain injured players like Tua.

This SEC highest ranked game of the year will be played in Alabama at Bryant-Denny Stadium on Nov. 9 at 3:30 p. It will be broadcasted on CBS.

Hey! I am a telecommunications major with a specialization in video production. I aspire to film documentaries with extreme athletes traveling around the world.
Previous Lightning Take on Energized Devils
Next Women’s Gator Hoops Open Season With Exhibition Game