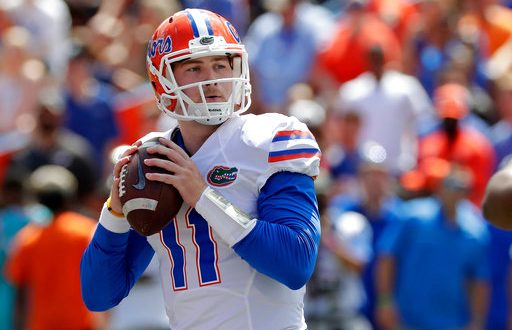 Playoff hopes were slashed in Jacksonville as the sixth ranked Florida Gators fall to the eighth ranked Georgia Bulldogs 24-17 on Saturday. The Gators suffered their second loss of the season. While hopes for a run at the SEC Championship are not over, their chances have greatly decreased. The Gators fall to 4-2 in the SEC and now trail the Bulldogs in the standings.

The Half That Did the Gators In

The story of the first half can be summed up as the Gators having difficulties on offense.  The writing on the wall for how the game would go came on the first drive of the game.

The Gators took the ball across the field to the Georgia 40 yard line, then turned it over on downs. The rest of the half went as follows for the Gators.

Meanwhile, Georgia had two field goals and a touchdown in the first half. Georgia led 13-3 going into halftime.

The Half That Could Have Save the Season

The Gators put up a stronger second half in the game against the Bulldogs. Following a Georgia field goal that gave the Bulldogs a 16-3 lead, the Gators got within a touchdown when Kyle Trask connected with Van Jefferson to make the score 16-10.

It seemed like Florida was gaining momentum. However, Georgia silenced all hopes when quarterback Jake Fromm completed a 52-yard TD pass to Lawrence Cager to give Georgia a 22-10 lead. A successful two-point conversion made it 24-10.

The Gators pulled back within a touchdown, but Georgia killed the clock to get the win.

In a loss that was winnable for the Gators, the statistic to look at, of all stats to look at, is third-down conversions. The Bulldogs converted on third down on 12 of 18 opportunities while Florida only converted 2 of 9 third down chances.  None occurred until the fourth quarter.

It sounds obvious, but it is worth pointing out. If the Gators were able to hold Georgia on third down, and perhaps convert more themselves, it is a completely different game in Jacksonville. The ability to execute a play made the difference tonight.

Despite being knocked out of the playoff race, but it’s not over. Gator coach Dan Mullen said in the post game conference that the Gators still have much to play for.

The Gators will be back at it again next week when they host the Vanderbilt Commodores on Saturday at noon.

Harrison is a sports coordinator at ESPN 98.1 FM/850 AM WRUF. He served as a beat writer for Florida Gators football for the 2019 and 2020 seasons. He also contributes to WRUF's Gainesville Sports Center segments and makes appearances on the Clash on Harp on Sports. Harrison has been a content writer for WRUF since January 2019 as well.
@HarrisonSmaj
Previous What Georgia loss says about Florida’s place in top-10
Next Five Gators claim All-SEC honors