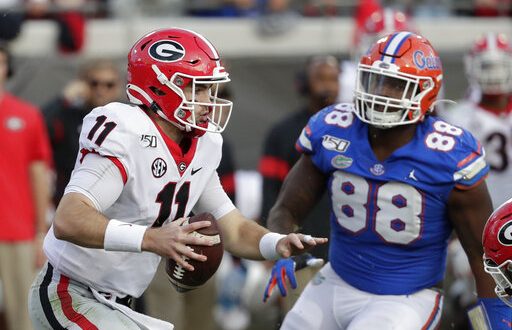 Before transferring to the University of Florida in 2018, defensive lineman Adam Shuler played two seasons at West Virginia. He appeared in all 13 games last season, starting 10 of them. Shuler totaled 39 tackles, 3.5 losses, and 3.5 sacks. As a redshirt junior, he was given the opportunity to enter the NFL Draft. He announced via Twitter that he will be returning for the 2019 season instead, despite speculations.

This season, the defensive lineman has totaled 19 tackles, 12 assists, 7 toe taps, and 1 sack. During the Miami, Auburn, and Towson games earlier this season, he totaled four tackles. He did ensue controversy during the Florida’s loss to Georgia. There were a few calls that frustrated Florida fans, one in particular involved Shuler. Many took to twitter to express their thoughts on Georgia’s offensive line.

Did the refs misplace their flags? I mean Adam Shuler is being held closer than my son held on to his snickers bar on Halloween.

The team was frustrated by some of the plays.

The Gators couldn’t get off the field on third down against Georgia. The Bulldogs were able to covert 12 of 18 third down situations, which fueled the win. This is the second year in a row where the Gators struggled on third down against their bitter rivals. Because of these troubles, Florida has now lost three years in a row against Georgia. Last year, the loss to Georgia led to a disappointing performance against Missouri the following week. This season, Florida has shown the ability to bounce back following a devastating loss.

Regardless of this game resulting in the second loss of the season, Shuler explains that head coach Dan Mullen motivates the team to keep their heads up and continue to exhibit positive attitudes.

Florida is now ranked just under Georgia in the SEC East division with a record of 4-2, while Georgia is at 4-1. They are just shy of the Bulldogs in their overall record as well, with 7-1 and 7-2.

The Florida Gators are finally making their way back to The Swamp for their next game against Vanderbilt. Kickoff at noon.

Sara Dastgerdi is a current student at the University of Florida.
Previous Here Comes the First College Football Playoff Top Four of the Season
Next UNF Ready for Challenge against Gator Hoops

Monday marks the first day of the annual SEC Media Days being held in Hoover, …