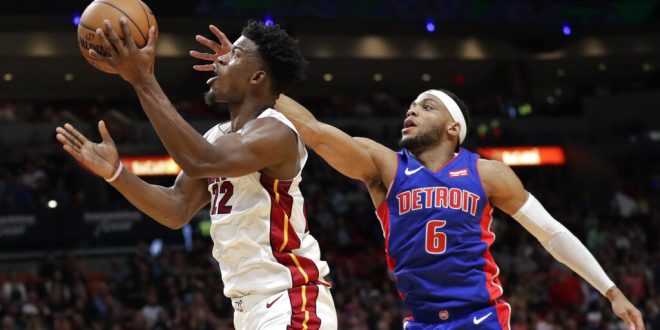 Butler Gets Double-Double With Heat

The Miami Heat improved to 7-3 with a 117-108 home win over the Detroit Pistons Tuesday night. The Heat had four players score between 18 and 20 points in the game. Jimmy Butler led the way with a 20-point, 13-assist double-double.

The Heat got off to a quick start. In the first quarter, the hosts put up 28. In the second, they bettered their previous tally with 31.

Conversely, the Pistons struggled out of the gates. Detroit scored just 17 points in the first quarter and 20 in the second. At the half, the Heat led 59-37.

It looked all but over at the halftime interval, but the hosts would come roaring back in the second half.

The Pistons outscored the Heat in the third and fourth quarters 35-33 and 36-25 respectively, but it wouldn’t be enough.

Tyler Herro did not play with a high left-ankle sprain.

Jimmy Butler was the catalyst for Miami. He put up 20 points and 13 assists to secure his first double-double as a Heat player. In his first season with the organization, Butler is averaging 19.4 points per game, good for 32nd in the NBA.

It ain't no thing for JB! pic.twitter.com/x5yT7Jvt6C

Butler had plenty of help from his teammates. Three others scored at least 18 points, and five others put up double digits in the scoring column.

Drummond fell just one rebound short of a double-double.

The hosts also led in rebounds (42-32) and assists (34-27). Defensively, Detroit picked up nine blocks to the Heats’ one and nine steals to Miami’s six.

Next up, the Miami Heat will face the Cleveland Cavaliers on Thursday at Quicken Loans Arena. Tipoff is scheduled for 6 p.m.