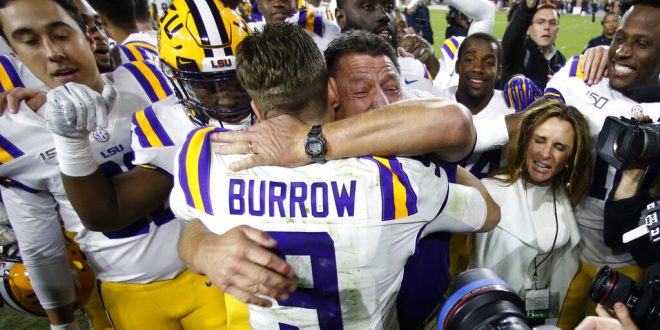 The AP Top 25 poll Week 12 rankings are in and there’s been some movement.

The LSU Tigers take the top spot after a huge victory over Alabama this weekend.

After this weekend’s 46-41 win over the Crimson Tide, the Tigers secured the top spot on the AP Top 25 Poll.

LSU has a 9-0 overall record and a 5-0 SEC Conference record.

Their next game is this Saturday against Ole Miss.

With its first taste of adversity, Ohio State still came out victorious over Maryland this weekend.

Their 73-14 win came after news broke that star defensive end Chase Young would be sitting out of the game.

The potential violation could be connected to a loan he took from a family friend to buy his girlfriend a ticket to watch him play in the Rose Bowl. He claimed to pay the loan back in full.

The Buckeyes boast a 9-0 overall record and a 6-0 Big Ten Conference record.

Their next game is this Saturday vs. Penn State.

Clemson just secured the ACC title this weekend with a 55-10 win over NC State.

The Tigers hold a 10-0 overall record and 7-0 ACC Conference record.

Their next game is this Saturday vs. Wake Forest.

The Crimson Tide’s undefeated record came to an end this weekend behind a 46-41 loss to LSU.

“Look, the No. 1 thing that I’m concerned about, just so everybody gets it, is how we complete the season,” Head Coach Nick Saban said Monday. “I don’t want to talk about anything other than the game that we have this week. We’re not making any predictions or whatever.”

Their next game is this Saturday vs Mississippi State.

The Bulldogs are coming off a 27-0 victory over Missouri this past weekend. Last week they saw a big jump in the polls after a 24-17 victory over a sixth-ranked Florida team.

Georgia has an 8-1 overall record and a 5-1 SEC Conference one.

Their only loss on the season comes from South Carolina: 20-17.

Their next game is this Saturday versus 11th ranked SEC opponent Auburn.

According to CBS Sports, these CFP rankings are projected to have Georgia ranked fourth and Alabama coming in at #5.

Both the projected CFP ranking and the AP Top 25 poll have Oklahoma at #10.